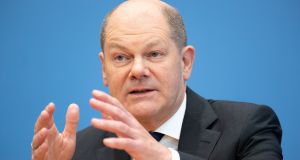 German finance minister Olaf Scholz: ‘150 billion is a large amount, but it gives us the flexibility that we now need’. Photograph: Hayoung Jeon/EPA

Germany is readying an emergency budget worth more than €150 billion to shore up jobs and businesses at risk from the economic impact of the coronavirus outbreak, the finance minister said on Saturday.

Government sources told Reuters that hundreds of billions in additional backing for the private sector would be raised, as finance minister Olaf Scholz said a ceiling on new government debt enshrined in the country’s constitution would be suspended due to the exceptional circumstances. The move is a major step for Germany, which has traditionally refused to move away from its strict budget and debt rules.

“A hundred and fifty billion is a large amount, but it gives us the flexibility that we now need,” Mr Scholz said.

“In addition we are laying the ground for various other institutions of our nation to take the steps necessary to stabilise our companies ... it’s important to send a clear and strong signal right at the beginning,” he told a news briefing.

According to senior officials and a draft law seen by Reuters, the package will include a supplementary government budget of €156 billion,€100 billion for an economic stability fund that can take direct equity stakes in companies, and €100 billion in credit to public-sector development bank KfW for loans to struggling businesses.

On top of that, the stability fund will offer €400 billion in loan guarantees to secure corporate debt at risk of defaulting, taking the volume of the overall package to more than €750 billion.

Under Germany’s so-called debt brake rule, Berlin is allowed to take on new debt of no more than 0.35 per cent of economic output, unless the country is hit by a natural disaster or other emergencies.

Mr Scholz said on Saturday the government would invoke such an exception, confirming a Reuters report on Thursday.

“We will take out more debt than what is normally allowed under the constitution,” Scholz said, adding that austerity in previous years had prepared the ground for such a move and that a debt-repayment schedule would be part of the draft law.

Chancellor Angela Merkel has vowed to do “whatever it takes” to counter the epidemic’s economic impact, and her cabinet is set to back the package of fiscal measures on Monday. - Reuters