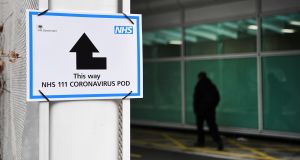 The health service in England has confirmed another 53 people have died from coronavirus. Photograph: Andy Rain/EPA

A further 53 people have died in the UK after testing positive for coronavirus, bringing the total number of confirmed deaths to 233, the National Health Service (NHS) said on Saturday.

The patients who died were aged between 41 and 94 and all had underlying health conditions.

The announcement came after British prime minister Boris Johnson told all Britain’s pubs, restaurants and gyms to close on Friday night and not to reopen on Saturday. He said the closures, which also apply to cafes, cinemas, nightclubs, leisure centres, betting shops, casinos, and bingo halls, would save lives by reducing pressure on the NHS.

Chancellor of the exchequer Rishi Sunak announced at the same time that the British government would pay 80 per cent of the salary of any worker who is furloughed rather than made redundant, up to a maximum of £2,500 (€2,700) a month. The scheme will be backdated to March 1st and will continue for at least three months and Mr Sunak said there was no limit to the amount of money the government was willing to spend on the scheme. - Additional reporting: Reuters