Coronavirus: Cases in Republic rise to 785 as Government response criticised

Ministers move to address shortcomings in the €203 pandemic unemployment payment 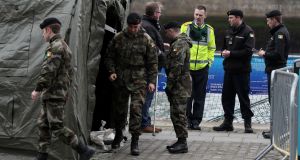 A member of the National Ambulance Service with members of the defence forces on Sir John Rogerson’s Quay in Dublin. Defence forces tents have been set up as a testing centre for Covid-19. Photograph: Brian Lawless/PA Wire

The number of confirmed coronavirus patients in the Republic has risen to 785 after 102 newly discovered cases were confirmed on Saturday evening.

This means the cases in Ireland have more than doubled in the last three days and comes at a time when the Government’s response to the crisis is coming under criticism from the opposition.

The Government was scrambling this weekend to amend its €203 per week pandemic unemployment payment scheme which Minister for Finance Paschal Donohoe has admitted is likely to be insufficient for many people.

More than 140,000 people have lost their jobs in the State so far as a result of restrictions introduced to curb the virus. DCU economics lecturer Tony Foley said on Saturday the final job loss total will exceed the 300,000 lost during the economic crash around the banking crisis.

Main events in the coronavirus crisis on Saturday

While the existing restrictions have caused huge economic upheaval nationally, and at a time when the global economy is undergoing similar upheaval, the HSE’s chief clinical officer Dr Colm Henry repeated on Saturday that there was as yet no need for additional measures, if those in place were property adhered to.

He said 10,000 people have now been tested in the Republic and there are now 32 test centres operational, meaning that the waiting times for testing and receiving results should fall.

Mr Donohoe said on Friday night that he accepted that for many people the €203 per week pandemic unemployment payment is not enough “and we need to consider that, but we need to do something really quickly for those at risk of losing their jobs”.

In the interim, the Government has announced changes to its existing financial support arrangements, which would allow employers to top up the Covid-19 unemployment payment offered by the State.

Sources said Ministers were now looking at a broader scheme similar to measures being introduced elsewhere in Europe and the UK, where the government has committed to pay 80 per cent of wages, up to £2,500 (€2,700) per month, for people out of work as a result of the pandemic.

While acknowledging the concerns around the €203 payment, Mr Donohoe said: “We have to be highly responsive. None of us could have imagined something like this could have happened as quickly as it did."

Mr Donohoe’s Cabinet colleague and Minister for Social Protection Regina Doherty on Saturday also accepted the Government’s €203 Covid-19 pandemic unemployment payment was insufficient for those who have lost incomes due to the crisis.

Speaking to RTÉ radio, Ms Doherty said the payment was an emergency aid and said the Government recognises something different is now required.

She said her department was working on a new approach over the weekend and said she hoped Mr Donohoe would be in a position to announce the details in the coming days.

Trade unions are calling for up to 75 per cent of an employee’s wages to be covered by the Government with the remainder covered by employers.

Fianna Fail has criticised the Government’s overall response to the pandemic and in particular the emergency payment, saying it does not come close to meeting the needs of people who have lost their jobs as a result of the pandemic.

The party’s finance spokesperson Michael McGrath said the Government must focus on designing a scheme that enables people to receive as much of their income as possible for this temporary period.

Mr McGrath - whose party is involved with government formation talks with Fine Gael - also criticised the Government’s overall response to the crisis, describing it as “piecemeal, underwhelming and poorly executed”.

He said it was not tenable to expect those who have lost their job to survive on €203 per week “while waiting weeks for even basic child dependant or adult dependant top-ups”.

Pubs will be shut

Meanwhile, the Minister for Health has said pubs that remain open in defiance of the Government’s advice to close for at least two weeks during the coronavirus pandemic will be shut down under new emergency powers signed into law on Friday.

Simon Harris said he has heard rumours of pubs not following the public health advice and he had seen video clips on social media of pubs “beginning to open in various fashion.”

“We will shut you down if you are a pub that is remaining open, you are letting down the people of this country, you are also letting down your fellow publicans who are helping out and complying at great difficulty to them and their staff at a very challenging time,” he said on Saturday.