A video of a Ringsend community playing bingo while adhering to social distancing went viral on social media getting over a million views, they now plan on hosting more games. Video: Enda O'Dowd 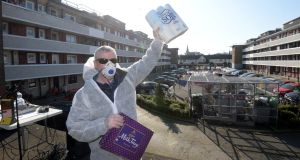 The man who invented balcony bingo last week and then brought it to families confined to their homes in a flat complex in Dublin’s Ringsend has expressed amazement at how far and how fast his novel approach to bringing isolated people together has spread.

On Friday and then again on Sunday Michael Larkin hosted bingo sessions for residents of the Canon Mooney Gardens flat complex in Dublin 4 with Easter eggs as prizes for the children and, possibly even more prized toilet rolls on offer for the grown ups.

He told The Irish Times that he had been “in lockdown with the kids” last week when he had the notion to arrange a game of bingo for his neighbours in a fashion which would strictly adhere to all the social distancing rules now in place around the country.

He had never organised – or even played – a bingo game in his life but when the community activist suggested it to his family they reckoned he was onto a winner.

So he got kitted out in a white disposable boiler suit, mask and gloves and with electricity borrowed from a neighbour set up a bingo stall on the roof of “the pram sheds” in the complex.

“Once I was on the pram sheds I made the big announcement and said to everyone to stay on their balcony. I said if they were not on the balcony they would not be allowed play.”

While the game was getting under way and people were getting their bingo cards – from a safe distance – his daughter Hollie used the PA system to play music. “I played music for half an hour while the bingo cards were going around just to keep everyone going. I played a bit of Tina Turner and Whitney Houston.”

Then the game started. It lasted hours. “It took around 2½ hours to play the bingo and it was absolutely bitter cold,” Larkin said.

He returned, shivering, to his own flat and after which his phone lit up with calls coming from as far apart as Washington and Australia. “They were all saying that the Italians were singing on the balcony and the Irish were playing bingo. It’s all just a bit of craic at the end of the day,” he said.

It is a bit more than a bit of craic, as it happens.

Larkin said there were a lot of children and older people in the complex and none of them had been allowed leave their homes in recent days. “This is all about helping to connect people and keep them safe.”

On Friday, as many as 60 residents took part in the “balcony bingo” with the number climbing on Sunday as more parents got in on the act. The complex has a lot of elderly residents and is also home to some families.

Given the success of the event, plans are being put in place to extend it to other flat complexes in the area.

“We were trying to come up with ways to connect the community while maintaining social distancing,” said Ringsend and Irishtown Community Centre staff member Jennifer Betts.

“The flats are a great place and people can come out to their door. As a community centre we are trying to be the focal point for people locally.”

The centre has been delivering free dinners to the older community, provided by aircraft leasing company Avolon, Artizan Food and Joanne’s The Bridge Cafe, and checking in on those who are isolated. It is also maintaining an online presence with baking and poetry competitions.