Boris Johnson has claimed the UK is "past the peak" in his first press conference since recovering from Covid-19. 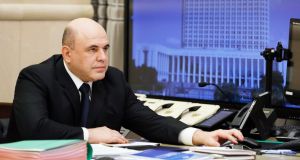 Russian prime minister Mikhail Mishustin told president Vladimir Putin on Thursday that he had been diagnosed with coronavirus and was temporarily stepping down to recover.

Mr Putin, who was listening on a televised video conference, sighed when he heard the news, wished Mr Mishustin a speedy recovery and said he agreed with the proposed replacement.

Mr Mishustin, who has been one of the main co-ordinators of Russia’s response to the pandemic, is the first high-ranking Russian official to publicly say they have the virus, also known as Covid-19. He broke the news hours after a record daily rise in the number of confirmed cases of the virus brought the total past the 100,000 mark.

“I have found out that the coronavirus tests I had done returned with a positive result,” said Mr Mishustin, who was appointed by Mr Putin in January. “I need to self-isolate, and follow doctors’ instructions. This is necessary for the safety of my colleagues.”

“What is happening to you can happen to anyone,” Mr Putin said. “When you get to the hospital, call me. I’ll be waiting for your call.”

Russia this week overtook China and Iran in the number of confirmed cases arising from the global pandemic.

Russia has so far reported 1,073 coronavirus-related deaths, a figure far lower than many of the hardest-hit countries however.

France reported 289 further deaths on Thursday, its lowest increase on a weekday since the end of March.

On Sunday, only 242 new deaths were reported, but on Sundays the data reporting from nursing homes is often delayed, leading to a catch-up during the week. The country’s overall death toll now stands at 24,376.

Health ministry chief Jérôme Salomon said the number of people in intensive care units fell to 4,019 from 4,207 on Wednesday, down for a 22nd consecutive day.

Mr Salomon said the number of confirmed coronavirus infections in the country rose by 1,138 or 0.9 per cent to 129,580 from a revised 128,442 on Wednesday. The ministry had already reported 129,859 cases on Tuesday, before the revision.

British prime minister Boris Johnson said the UK was “past the peak” of the coronavirus outbreak and “on a downward slope” on Thursday .

He said a further 674 patients had died in hospitals, care homes and the wider community after testing positive for Covid-19 as of 5pm on Wednesday. The overall death toll is 26,711, the second highest figure in Europe.

Leading his first Downing Street briefing since recovering from the virus, Mr Johnson said he would set out a comprehensive plan next week on how to start reopening the economy.

Deaths in Italy climbed by 285 on Thursday, against 323 the day before, the Civil Protection Agency said. The daily tally of new infections stood at 1,872, down from 2,086 on Wednesday. The total death toll now stands at 27,967, the agency said, the second highest in the world after the US.

In Spain, the number of fatalities recorded overnight fell to 268, the lowest tally in nearly six weeks, the country’s health ministry said on Thursday. The number of cases registered in the country rose to 213,435 from 212,917 the day before. Data showing the Spanish economy shrank by the widest margin on record in the first three months of the year laid bare the heavy cost of measures to control the outbreak.

Spain’s economy shrunk by 5.2 per cent in the first quarter compared with the previous period, preliminary data showed, with household spending plunging 7.5 per cent as people hunkered down at home with most shops, bars and restaurants closed in March. On Tuesday, prime minister Pedro Sanchez outlined a four-phase plan to lift the lockdown with a planned return to normality by end-June. Under the plan, hairdressers and other businesses that operate via appointment will open from Monday, while restaurants will be able to offer takeaway services.

The number of new coronavirus cases in Germany rose the most in four days as the government considers further steps to ease restrictions on daily life.

Cases in Germany have risen by 1,478 to 159,119, data from the Robert Koch Institute for infectious diseases showed on Thursday. According to the tally, 6,288 people have died of the disease, a rise of 173 compared with Wednesday. Berlin has announced plans to step up Covid-19 testing of all nursing home residents amid uproar over a suggestion that healthcare resources are being wasted on at-risk, elderly Germans.

South Korea on Thursday reported no new domestic coronavirus cases for the first time since February, the Korea Centers for Disease Control and Prevention (KCDC) said.

KCDC reported four new infections, all imported cases, taking the national tally to 10,765. The death toll rose by one to 247, while 9,059 have been discharged.

Of the total, 1,065 were imported cases, where more than 90 per cent were Koreans, according to a KCDC statement.

The health authorities also concluded no local transmission occurred from a parliamentary election this month, where authorities took safety measures, including requiring voters to wear masks and plastic gloves when casting ballots.

A clinical expert panel on Wednesday also concluded that recovered coronavirus patients who later test positive for the virus again were not “reactivated” or reinfected, but were false positives.The head of the committee said the false positives were due to technical limits of PCR testing. The country has so far reported 292 such cases.

China reported four new coronavirus cases for April 29th, down from 22 a day earlier, data from the country’s health authority showed. All of the cases were imported, the National Health Commission said. It also reported 33 new asymptomatic cases over the day, up from 26 a day earlier.

Thailand on Thursday reported seven new coronavirus cases but no new deaths, taking its tally to 2,954 cases while fatalities remained at 54 since the outbreak began in January. New daily infections have stayed in the single digits for four consecutive days.

Japanese prime minister Shinzo Abe said on Thursday he would consult infectious disease experts on whether to extend a national state of emergency to contain coronavirus infections. Mr Abe declared the nationwide state of emergency on April 16th to last through May 6th, and local media said the declaration will likely be extended for another month. The measures rely on persuasion for citizens to stay home and businesses to close as the country’s laws do not provide for an enforceable lockdown. Across Japan there have been 13,929 cases and 415 deaths, according to the health ministry, still far lower figures seen in the US and Europe.

More than two dozen US states moved ahead with plans to relax restrictions on business and social life, hoping to reverse the economic blows of the coronavirus that caused another 3.84 million Americans to file jobless claims last week.

Anthony Fauci, director of the National Institute of Allergy and Infectious Diseases and a White House task force member, warned states not to move too fast, a refrain of many public health officials since states, led by Georgia, started easing restrictions.

The number of coronavirus cases is still climbing in many parts of the country, although peaks already have been reached in New York, the US epicentre of the outbreak, and other places. Indiana, Massachusetts, Ohio and Pennsylvania reported record daily death tolls on Wednesday and the total number of US deaths topped 61,000 with well over 1 million confirmed cases as of Thursday.

In Brazil, Manaus was the first city to run out of intensive care units, but officials warned that several other cities are close behind as the country registered a record 6,276 new coronavirus cases on Wednesday. Brazil’s health ministry reported 449 related deaths in the prior 24 hours, bringing the death toll to 5,466 out of 78,162 confirmed cases. Brazilian right-wing president Jair Bolsonaro, who has downplayed the gravity of the virus, calling it a “little cold,” came under new criticism for his remarks on the soaring deaths. “So what? I’m sorry, but what do you want me to do?” Mr Bolsonaro told reporters on Tuesday, saying he could not “work miracles.” The accelerating death rate in Brazil is the most concerning of all emerging-market nations, Deutsche Bank analysts told clients in a note on Wednesday.

The number of coronavirus cases in South Africa surged past the 5,000 mark on Thursday after it saw the largest single-day jump to date, health ministry figures showed. A total of 354 new cases were confirmed on Thursday, bringing the overall total to 5,350, and the number of fatalities spiked by 10 to 103.

Yemen reported multiple coronavirus infections and deaths linked to the disease for the first time on Wednesday and an official in the southern port of Aden said the number of cases was very likely to increase in the coming days. The United Nations has said it fears the novel coronavirus could be spreading undetected in a country where millions face famine and lack medical care after Yemen announced its first Covid-19 case in the southern Hadhramout province on April 10th. Yemen has been mired in conflict since the Houthi group ousted the internationally recognised government from power in the capital Sanaa, prompting a Saudi-led alliance to intervene in March 2015. The war has shattered health and sanitation systems and authorities lack testing capabilities. Health workers say the virus could spread rapidly in a country where 24 million people - 80 per cent of the population - rely on aid, and 10 million are at risk of famine. Disease is rife. – Agencies