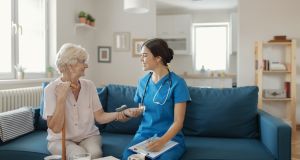 Some 85 nurses and 120 healthcare assistants had been deployed as of last Friday, according to data released by the HSE to Fianna Fáil. File photograph: Getty

Neither private nor public medical staff have been redeployed to nursing homes at scale, new figures reveal, despite ongoing staffing difficulties in the sector.

According to figures supplied to Fianna Fáil health spokesman Stephen Donnelly, only one Health Service Executive nurse has been redeployed for every five private nursing homes, despite plans to help the struggling sector face mounting challenges posed by coronavirus outbreaks.

Some 85 nurses and 120 healthcare assistants had been deployed as of last Friday, according to data released by the HSE to Fianna Fáil.

About 100 shifts were covered by home-help staff from the private sector during April, with sources indicating that at minimum, 2,000 shifts a month could be covered by the deal between the HSE and home-help companies.

“From our point of view there are significant challenges in respect of staffing due to the fact many staff are out as a result of testing positive, many of them asymptomatic,” he said.

According to figures released to Fianna Fáil, some 400 hospital patients had been released into nursing homes during the early stages of the crisis but only those who were symptomatic were tested.

Mr Donnelly said it was “disappointing to see that the total numbers being deployed are small. While thankfully there are nursing homes that don’t require support right now, there are many nursing homes with very high levels of nursing and other staff out sick or self-isolating. At the same time, the private hospitals are currently at 33 per cent capacity. Given that, it seems like there should be staff available from this sector for deployment.”

The deal governing the redeployment of private sector home-help staff was only finally signed off on Tuesday, despite being announced on April 2nd, The Irish Times has learned. While some redeployments have taken place, the scale has been limited as issues around training, record keeping and indemnification delayed final agreement.

About 600 private home-help workers have indicated an interest in being redeployed, it is understood. Due to the scaling back of some home-support services caused by the crisis, and the fact that many thousands of older people with lower priority needs cocooning, spare capacity has emerged in the home-help sector.

In a memo to NHI staff issued on Tuesday, member organisations were told that a framework agreement governing secondment of private sector home-help groups to nursing homes had been reached. A HSE spokeswoman confirmed the deal had been signed, with the HSE funding it initially “with costs to be recouped from the residential units/nursing homes in due course”.

Joseph Musgrave, chief executive of Home and Community Care Ireland, the trade body for private home-help operators, said “the first priority of our members is to support vulnerable people in the community. We will continue to support our partners in the nursing home sector, and we hope to get an indication of how many staff are needed to allow everyone to plan effectively.”

Elsewhere, a Siptu spokesman said that grant-funded home-help groups where its members are working have not seen significant redeployment to nursing homes.