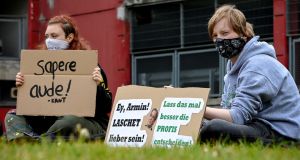 Berlin has announced plans to step up Covid-19 testing of all nursing home residents amid uproar over a suggestion that healthcare resources are being wasted on at-risk, elderly Germans.

Green Party politician Boris Palmer, mayor of the southwestern city of Tübingen, suggested Germany had a greater moral obligation to assist developing countries, which are unable to afford virus testing and treatment, than use these resources on people at home with a limited life prospective.

“Let me be brutally honest: in Germany we’re rescuing people who, because of pre-existing conditions, would be dead in a year anyway,” said Mr Palmer on German breakfast television.

The mayor, no stranger to provocation politics, suggested at-risk groups should be put in quarantine to allow Germany back to work.

His remarks were attacked as “Darwinian” by close Green Party colleagues and attacked in all German media outlets. For the Süddeutsche Zeitung daily, Mr Palmer’s suggestion was “ethically speaking, off the wall”.

“Human dignity means that the health of every person is protected, regardless of how old we are,” she said.

Mr Palmer’s remarks come days after Bundestag president Wolfgang Schäuble weighed into a growing debate over the ethics of the global Covid-19 shutdown. Dr Schäuble said it was “not correct” to push an “absolutist” claim that protecting life must always take priority. Germany’s constitutional protection of human dignity, he said, did not qualify as protection against death.

“The state has to decide the best-possible healthcare for all but people will continue to die from coronavirus,” he said. “We cannot leave the decision to the virologists, we have to weigh up the massive economic, social, psychological and other consequences. Closing everything down for two years would have terrible consequences.”

On Wednesday federal economics minister Peter Altmaier said Germany is facing into its worst recession in postwar history, with an economic slump of 6.3 per cent likely this year.

A month-long shutdown of most of Europe’s largest economy has, Mr Altmaier said, triggered a recession of “an unprecedented scale”. Exports are likely to slip 11 per cent, though a gradual loosening of lockdown measures could see recovery later this year and growth of five per cent next year.

Chancellor Angela Merkel and officials meet on Thursday to review the effect of looser lockdown measures on the latest infection statistics. On Wednesday Germany had 160,000 confirmed Covid-19 cases to date, most of whom have since recovered. With about 40,000 still ill with the virus, Germany has recorded about 6,200 deaths – a death rate of 190 per 100,000 people.

Reopening some shops and services has come with a slight rise in daily infections; virologists say the coming days will be crucial to decide whether to declare a further shutdown.

Starting a fresh push against the virus, Germany is to loosen the criteria to qualify for a Covid-19 test. Until now tests were prioritised for people with a cough or similar symptoms and either a job in the health sector or contact with at-risk groups.

After a surge in tests in the first weeks of the pandemic, weekly test numbers have dropped to 467,000 – about half the total test capacity. With German care homes hit badly by the virus, federal health minister Jens Spahn wants to use the spare capacity “to make more regulated tests possible in care homes even for those with no symptoms”.