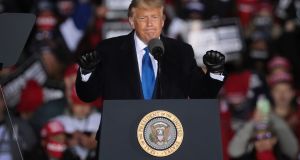 US president Donald Trump speaks to supporters during a campaign rally at the Waukesha County Airport in Wisconsin on Saturday. Photograph: Scott Olson/Getty Images 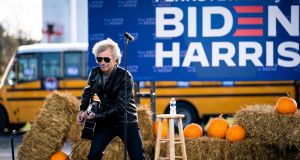 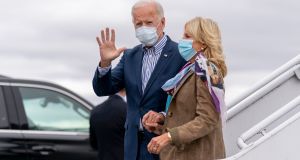 US president Donald Trump has embarked on a whistle-stop tour across key battleground states this weekend, as he aims to close the polling gap with his Democratic rival Joe Biden in the US presidential election campaign.

After casting his vote in Florida on Saturday morning, Mr Trump held rallies in three states – North Carolina, Ohio and Wisconsin on Saturday, with further events scheduled in New Hampshire on Sunday.

The president held the rallies despite coronavirus cases continuing to break the 80,000 daily mark in the United States. The death toll on Saturday was 885, bringing the total number of deaths in the US to almost 225,000. But the president insisted that America is “rounding a corner” when it comes to the coronavirus, claiming that Americans were sick of “negativity.”

“Covid, covid, covid … On November 4th you won’t hear about it any more,” he told a crowd of about 3,000 supporters at a rally in Lumberton, North Carolina.

He insisted that America’s high coronavirus case numbers was because “we test more than any country in the world.”

“You use the word cases because you’re trying to scare people,” he said in response to questions from reporters.

As Mr Trump took to the campaign trail with just nine days to go to the US election, Joe Biden held two events in Pennsylvania, another key swing state. A group of Trump supporters, driving trucks and waving Trump flags, arrived at Mr Biden’s drive-in rally in Bucks County and heckled the candidate from outside the grounds. Later in the afternoon, Joe and Jill Biden were joined by singer Jon Bon Jovi in Luzerne County.

“Joe believes in the power of we,” said the award-winning rockstar. “I believe that Joe knows that masks are not a sign of weakness, they’re a sign of strength and of respect,” he added, before performing a song: “Do What You Can.”

Bon Jovi was not the only celebratory to take to the stump for Biden this weekend – Cher held campaign events in Las Vegas, Nevada and Phoenix, Arizona this weekend.

Former president Barack Obama also returned to the campaign trail on Saturday, holding an event in Miami, Florida, where he urged people to vote for Joe Biden on November 3rd and to participate in early voting if possible.

“Donald Trump is not going to protect all of us — he can’t even take the basic steps to protect himself ...” he said, as he slammed the president’s response to coronavirus.

He also took issue with the president’s move to abruptly end an interview with TV programme 60 Minutes this week.

Mr Biden also lambasted the president’s response to coronavirus, warning that there is “a dark winter ahead.”

“Experts say we’ll lose nearly another 200,000 lives nationwide in the next few months because he cares more about the stock market than he does about you, because he refuses to follow science,” he told supporters in Luzerne County.

Polls show Joe Biden with a double-digit lead over the incumbent nationally. He is also leading in a key group of swing states though by smaller margins. More than 52 million Americans have already cast their vote, a record number.