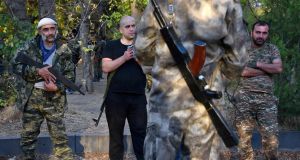 Azerbaijan and ethnic Armenian forces clashed in several parts of Nagorno-Karabakh on Friday, as the United States stepped up diplomatic efforts to try to end the deadliest fighting in the mountain enclave for more than a quarter of a century.

US secretary of state Mike Pompeo met separately with the foreign ministers of Azerbaijan and Armenia in a new attempt to end nearly a month of bloodshed in which Russian president Vladimir Putin said 5,000 people may have been killed.

The collapse of two Russia-brokered ceasefires has dimmed hopes of a quick end to fighting that broke out on September 27th over Nagorno-Karabakh, a breakaway territory which is within Azerbaijan but is controlled by ethnic Armenians.

A handful of protesters from both sides, holding Armenian and Azeri flags and banners, chanted outside the US state department on Friday.

Both ministers held separate meetings with Mr Pompeo that lasted about 30 to 40 minutes. Asked how his talks went, Armenian foreign minister Zohrab Mnatsakanyan told reporters “very good” as he exited the state department, and added that work on a ceasefire would continue.

World powers want to prevent a wider war that draws in Turkey, which has voiced strong support for Azerbaijan, and Russia, which has a defence pact with Armenia.

Shortly before the Washington talks were due to start, Turkish president Recep Tayyip Erdogan told reporters in Istanbul that he hoped Moscow and Ankara could work together on resolving the conflict.

Reiterating demands for a Turkish role in mediation which has long been led by the United States, Russia and France, he said: “Turkey believes it has just as much right as Russia to be involved here for peace.”

Washington, Paris and Moscow have ignored such calls, and differences over the conflict have further strained relations between Ankara and its Nato allies, with Mr Pompeo accusing Turkey of fuelling the conflict by arming the Azeri side. Ankara has denied the charge.

In the latest clashes, Azerbaijan’s defence ministry reported fighting in areas including territories close to the line of contact that divides the sides.

Armenia’s defence ministry also reported fighting in several areas and said the town of Martuni in Nagorno-Karabakh was shelled during the night. Azerbaijan denied this.

Azerbaijan has expressed concern about the security of pipelines close to the fighting that carry Azeri oil and gas through the South Caucasus to world markets, but none has been damaged.

Mr Pompeo said this week he hoped the “right path forward” could be found at the talks, but Armenian prime minister Nikol Pashinyan said he saw no diplomatic resolution of the long-running conflict at this stage.

The 15-member UN Security Council had been trying to agree on a statement on the Nagorno-Karabakh conflict, but diplomats said negotiations stalled because some members wanted references to previous UN resolutions on the conflict while Russia, the United States and France did not.

Azeri president Ilham Aliyev has described the prospects of reaching a peace settlement as “very remote,” and demanded promises that Azerbaijan will be handed back control of Nagorno-Karabakh.