US president defends his handling of the pandemic during public event 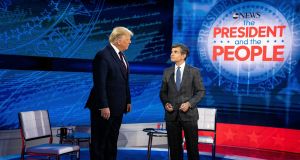 Donald Trump and George Stephanopoulos at the televised public event in Philadelphia, during which the president denied he downplayed the threat of Covid-19. Photograph: Anna Moneymaker/The New York Times

US president Donald Trump defended his handling of the coronavirus pandemic, as he came under sustained questioning by members of the public about his response to the virus at a televised event.

Mr Trump, who mostly gives interviews to Fox News, participated in an ABC News “town hall” meeting where he came under repeated questioning by undecided voters over the virus which has claimed the lives of more than 190,000 people in the United States.

“I didn’t downplay it. I actually, in many ways, I up-played it in terms of action,” Mr Trump said, as he responded to an audience question about his response to the virus.

It follows claims in a new book by veteran journalist Bob Woodward that the president specifically played down the seriousness of the virus publicly in the spring, at the same time as he was privately warning about its dangers.

Mr Trump was on the defensive during much of Tuesday evening’s televised event. He highlighted his decision to impose a travel ban on passengers from China and Europe. “We would have lost thousands of more people had I not put the ban on,” he said.

“We did a very, very good job when we put that ban on, whether you call it talent or luck, it was very important so we saved a lot of lives when we did that.”

Mr Trump also appeared to question the advisability of wearing face masks to curtail the spread of Covid-19. Asked by a member of the audience why he does not wear a mask more regularly, Mr Trump replied: “I do wear them when I have to. I wear them in hospitals and other locations.”

But he stressed that “a lot of people think that masks are not good”.

Describing how waiters touch their mask and then touch tables, he said: “That can’t be good.” He also criticised Democrats for suggesting during the Democratic National Convention that a national mandate for masks should be introduced.

While Mr Trump stressed that a vaccine would soon be available, this was contradicted by the head of the Centre for Disease Control and Prevention (CDC) during a Senate committee hearing on Wednesday. Robert Redfield told the committee that a vaccine would not be available to the general public until the second or third quarter of 2021. Mr Redfield also reiterated the importance of wearing face coverings to stop the spread of Covid-19.

“These face masks are the most important, powerful public health tool we have . . . I might even go so far as to say that this face mask is more guaranteed to protect me against Covid than when I take a Covid vaccine,” referring to a mask he was holding.

As Mr Redfield delivered testimony to the Senate committee, a top US health department official, Mark Caputo, announced he was taking a leave of absence from his job after writing an inflammatory Facebook post accusing government scientists of trying to undermine Mr Trump.

Meanwhile, Twitter labelled a tweet by Mr Trump containing a doctored video of his election rival Joe Biden as “manipulated media” on Wednesday, the latest move by the social media platform to censure the president’s tweets.

In a speech in Delaware on Wednesday, Mr Biden warned that further deaths are to come from coronavirus as winter approaches.

“We’re heading into a very dangerous autumn,” he said, warning that cases and deaths are going to spike this November, according to the University of Washington. “We need leadership right now.”

The Democratic candidate, who has been keen to keep the focus on Mr Trump’s mishandling of the pandemic ahead of November’s presidential election, had earlier been briefed by health experts on progress towards developing a vaccine.