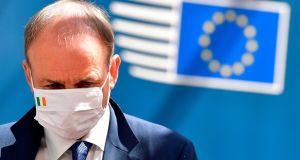 Taoiseach Micheál Martin was tested twice for Covid-19 following a trip to Brussels, The Irish Times has learned.

Mr Martin did not quarantine on his return to Ireland from the four-day European Council meeting last month. He left Brussels on the morning of July 21st, and took Leaders’ Questions in a Dáil sitting in the Convention Centre later that day.

A spokesman said the Government had sought advice regarding the trip, and said that acting chief medical officer Ronan Glynn had said “what the Taoiseach, the leader of the country, will be doing will be essential work”.

Mr Martin limited the size of his delegation, and took a test on his return and again seven days later, a spokesman said.

Fianna Fáil’s Billy Kelleher and Fine Gael’s Mairéad McGuinness have been regularly commuting between Belgium and Ireland in recent weeks for their work in the European Parliament.

The pandemic has upended the usual workings of the EU’s law-making body, which usually rotates between Brussels and Strasbourg. It has sat exclusively in the Belgian capital since March, with MEPs compelled to wear face masks and subject to temperature checks on entering the building.

Mr Kelleher told The Irish Times that in recent weeks he had travelled to Brussels “sometimes staying at the weekends, and sometimes returning to Ireland”.

The former Cork North Central TD was forced to apologise for skipping quarantine on one trip back to see Mr Martin elected as Taoiseach on June 27th. He did not respond when asked whether he had visited any location apart from his home on his trips back to Ireland.

Asked about whether MEPs are exempt, the HSE said the query should be directed to the Department of Health.

Ms McGuinness, who is first vice-president (VP) of the European Parliament, said she returned to work in Brussels on June 8th, and commuted back to Ireland on three weekends in the subsequent month.

“My role in the parliament is not the same as every other MEP. I’m here on VP duty, and other duties, and I take it very seriously, the whole health issue,” she said.

When asked whether she had visited any location other than Dublin Airport and her home during her trips back to Ireland, she said: “Home. Home. Home. I was only home for a day-and-a-half, so I wouldn’t be wanting to go anywhere else, why would I? Just to be clear on that.”

Belgium had a two-week quarantine requirement for people arriving from within the EU until June 15th, but people travelling for work reasons in key professions were exempt, including those working in institutions such as the European Parliament.

MEPs were advised to self-isolate for a fortnight “whenever they suspect they could have been in touch with possible positive cases”, according to a European Parliament spokeswoman.

The elected representatives have the option to work remotely, and many Irish MEPs have stayed in Ireland since the pandemic broke out, including the Green Party’s Grace O’Sullivan and Ciarán Cuffe, Fine Gael’s Frances Fitzgerald, Sinn Féin’s Chris MacManus and Independent Luke ‘Ming’ Flanagan.

Independents Clare Daly and Mick Wallace chose to stay in Brussels and have been attending parliament throughout. Ms Daly returned to Ireland for 10 days in May to see her family, and spent the time under quarantine in her home for the period, she said.

Fine Gael’s Maria Walsh and Seán Kelly and Fianna Fáil’s Barry Andrews returned to Brussels for the first time during the pandemic to attend the July 8th-10th plenary gathering at which MEPs debated a planned recovery fund and other issues and were addressed by German chancellor Angela Merkel.

Ms Walsh said she spent two weeks in quarantine on her parents’ farm in Co Mayo on her return from Brussels.

Belgium has recently seen a resurgence in infections after easing lockdown restrictions. This prompted Britain to add it to its list of countries from which travellers must quarantine, citing a four-fold increase in Covid-19 cases there since mid-July.

While MEPs working remotely can speak in committee and political group meetings and can cast ballots in votes, they cannot speak during plenary sessions. It has not yet been possible to find a technical solution that would allow for contributions from hundreds of remote participants, as well as simultaneous translation into all the EU languages, according a parliament spokesman.

Most MEPs said working remotely had clear advantages, including a better work-life balance, a lesser toll on the environment, and for some, the ability to attend more meetings than they did previously.

Some MEPs, including Mr Flanagan, favour introducing the system permanently.

“More time to think. Outside Brussels bubble and back living in my local community. Saves the taxpayer a fortune in travel expenses. Lower carbon footprint. Attend more meetings,” he said in an email.

As downsides, representatives mentioned that video-conferencing could be impersonal, that working hours could bleed into the evening time and mix with personal life, and that their contributions were at the mercy of unreliable internet connections.

For Mr Wallace, face-to-face parliamentary business remains essential. “There is no substitute for being in the chamber, and if you are challenging a commissioner it is so much better to be able to challenge them in person, in the room, rather than having them hiding behind a computer in absentia,” he told The Irish Times.

Mr Cuffe believes some elements of the changes brought about by the pandemic will be permanent.

“I suspect the crazy travel aspects of our lives as MEPs will diminish,” he said, noting that from March to June he did not leave the boundaries of Dublin. “In January and February I spoke at a road safety conference in Stockholm, a renewable energy workshop in Vienna, and a Cities Forum in Oporto.”

In comparison from March to June he had not “even travelled beyond the Meath border”.