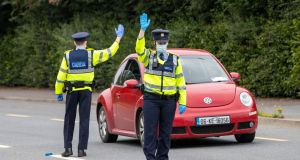 A Garda checkpoint on the main road into Nass: the acting chief medical officer says the restrictions for counties Kildare, Laois and Offaly are a proactive response to the rise in cases. Photograph: Tom Honan

Public health officials have called for fortnightly testing of asylum seekers in direct provision as well as homeless people and Roma living in congregated settings.

The National Public Health Emergency Team (NPHET) says the serial testing would be on a voluntary basis and done in conjunction with representative groups and SafetyNet, a medical outreach team working with at-risk groups.

NPHET says measures should be put in place to ensure economic considerations and insecurity of employment are not deterrents for people in these groups coming forward for testing.

A lack of sick pay has been cited as a deterrent in some work settings militating against staff coming forward for testing.

NPHET says in view of the high risk posed by congregated settings, and the recent pattern of cases in direct provision, State bodies should “take appropriate immediate actions to further mitigate risks associated with congregation”. This should be specifically “expedited” for healthcare workers, those aged over 65 and the medically vulnerable.

NPHET’s advice is contained in an appendix to its letter to Government last Friday, and seen by The Irish Times, which says “a very low threshold” should be applied for mass testing of workers in high-risk settings such as food processing and construction.

Employers should also keep under review the sharing of transport to and from work by staff and should provide clear guidance on maintaining physical distancing during these journeys.

In the letter to Government, acting chief medical officer Dr Ronan Glynn says the restrictions recommended by NPHET for counties Kildare, Laois and Offaly – which were universally accepted by Government – represent a “proactive and proportionate response” to the rise in cases in the three counties.

Despite a “significant and increasing” level of disease, community transmission is “stable and low at present”, he says.

Serial testing of nursing homes is to recommence next week, he says, while the HSE’s newly established national oversight group for the food processing industry is considering the most appropriate and proactive approach to testing within that industry.

The Irish Refugee Council (IRC) said Government must prioritise the replacement of the direct provision system without delay to stop the further spread of coronavirus among residents in overcrowded settings and society at large.

Lives will be put at risk if the State waits for the publication of the planned end-of-year White Paper before starting to implement a new housing system given the ongoing health risks of Covid-19, IRC chief Nick Henderson said.

The provision of PPE and hand sanitiser could “only go so far” in preventing the spread of the virus in congregated living settings, he added.

“There has to be a decision made as to whether we continue to have a situation where outbreaks are a real risk or we take decisive action to stop the spread of the disease,” said Mr Henderson.

Lucky Khambule from the Movement of Asylum Seekers in Ireland (MASI) agreed that the health and safety of people living and working in congregated settings, such as direct provision centres and meat plants, had not been protected in the same way as the rest of the population.

“It’s a simple thing that we’ve been saying since March – move people away from this congregated set-up and let people live on their own until everything is safe,” said Mr Khambule.

Minister for Children, Disabilities, Equality and Integration Roderic O’Gorman, who is due to take over the direct provision portfolio in the coming weeks, said in July that existing direct provision centres would continue to operate in the “short to medium term” while the longer term replacement of the system would be laid out by the end of the year. The Green Party TD had committed to replacing direct provision “within the lifespan of this Government”.