A look inside an eye trauma unit in Chile that’s responding to “an epidemic” of protesters who have been shot in the eye by police pellet guns. Video: NYT 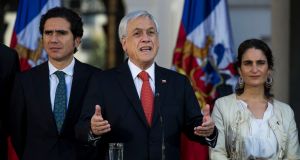 Chile’s president Sebastian Pinera promised to ensure police and soldiers found guilty of rights violations would be prosecuted with the same force as rioters and looters. Photograph: Getty

A Chilean prosecutor on Wednesday said he would seek court approval to investigate 14 police officers for allegedly torturing protesters during almost three weeks of intense unrest and rioting in the country.

Manual Guerra, the prosecutor for Santiago East, said the investigation was related to two separate cases during a nine-day state of emergency in the capital Santiago from October 18th.

One related to the actions of 12 police officers in Nunoa, a bohemian suburb of Santiago, where protesters defied a curfew to conduct successive nights of large but mainly peaceful demonstrations in a central square, said a spokesman for Mr Guerra.

The second related to two officers in the lower-middle class area of La Florida who were accused of beating a young man who was handcuffed, said the spokesman.

The alleged abuses took place against a backdrop of 20 days of mass rioting, looting and, more recently, peaceful protests over endemic inequality in one of Latin America’s richest nations.

Chile’s worst unrest since the end of Augusto Pinochet’s 1973-1990 dictatorship has caused at least 23 deaths, more than 7,000 detentions, and injuries to 1,659 protesters and 800 police officers, according to authorities and rights groups.

Prosecutors are investigating more than 800 allegations of abuses, including torture, rape and beatings by security forces during demonstrations over inequality and cost of living that have often degenerated into riots.

Mr Guerra’s spokesman said he would seek court authorisation to proceed with an in-depth investigation into the alleged abuses by the 14 officers, and request that they be held in preventative custody. The crime of torture can carry a prison sentence of between five and 10 years in Chile.

President Sebastian Pinera on Thursday promised to ensure police and soldiers found guilty of rights violations would be prosecuted with the same force as rioters and looters during nearly three weeks of violent protests.

A team sent by Michelle Bachelet, the UN human rights chief and former Chilean president, and another from Amnesty International, were also in Chile interviewing alleged victims.

“This president is committed to total respect for human rights at all times and in all circumstances,” the centre-right Mr Pinera said from La Moneda presidential palace in Santiago.

“With the same force that we are going to investigate, prosecute and sanction those criminal groups who have destroyed property, we will investigate any excess, failure of protocol in the use of force or excessive use of force.”

Mr Pinera said he had sought assurances from armed forces chiefs that international rules on the use of force would be followed after declaring a state of emergency over the unrest that began on October 18th after a hike in public transport fares.

He rejected criticism on social media that his ministers have visited only injured police, not protesters, saying he would visit demonstrators in the coming days.

Mr Pinera sent a law to parliament to guarantee a minimum wage of 355 Chilean Pesos (€430) a month, part of an ambitious social spending plan announced last month as the protests grew.

“We are responding with action and not just good intentions to those things that people have demanded with so much force,” he said. – Reuters