After 1989 many writers, actors, singers – and their work – sank without trace in the united Germany 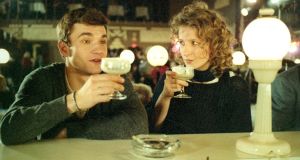 The film audience in East Berlin’s flagship “International” cinema had just witnessed history – and were about to witness history again.

It was November 9th, 1989, and they just seen the premiere of Coming Out, the first film to deal openly with homosexuality in the socialist Germany. It would also be the last.

While they watched, the most famous press conference in history took place. On live television, East Germans learned they were free to travel to the West, the border was open, Berlin was united. In the cinema, rumours reached the audience – and the film’s lead actor.

“I knew something was up because the street outside was completely blocked with Trabant cars, all driving west,” said Matthias Freihof, for whom the premiere was the first public acknowledgement of his homosexuality. “I remember one euphoric cinema-goer telling me: ‘What this whole country needs is its own coming out.’”

This Saturday, Freihof will return with the film’s surviving cast and crew to Berlin’s International cinema to celebrate their groundbreaking film. Though director Heiner Carow didn’t know it at the time, his ambitious film’s location shooting documented a city – and a gay scene – that was soon to vanish.

Just as drastic is the change of perception. From the lead character’s struggle with his homosexuality, to its portrayal of far-right skinheads that East Berlin denied existed, Coming Out is now recognised as a landmark of German cinema.

Across the arts, this weekend’s 30th anniversary of the fall of the Berlin Wall has sparked a second, more balanced look at art that emerged from the vanished socialist state.

Before and after 1989, West Germany questioned the legitimacy of the Soviet-backed East. This stick was used liberally by western artists and critics, too, to beat counterparts who happened to live on the other side of the Berlin Wall.

After 1989, though, the stick was deployed to varying degrees, depending on the medium. Some eastern writers such as Heiner Müller or Christa Wolf came through relatively unscathed, as did actors including Coming Out star Dagmar Manzel. But many other writers, actors, singers – and their work – sank without trace in the united Germany.

Now, after 30 years, there are signs of a truce in the most bitter stand-off of all – in the visual art world – with an increasingly differentiated view of eastern art and artists.

Expediting the thaw was the exhibition Point of No Return this year in Leipzig. Nearly 62,000 visitors flocked to see post-unification Germany’s largest-ever exhibition of eastern art, with 300 works that ran the gamut from established artists, who taught in official art schools, to dissident artists who defied the regime.

In some ways, the exhibition was a belated end to the cold war tensions that flashed up regularly in the visual art world. In 1977, western artists at Kassel’s documenta art show withdrew their work rather than be exhibited alongside “official” GDR artists.

Western assumptions ran deep that every eastern artist was a true believer, stuck in a rut of socialist realism. Few knew of other artists who battled material shortages to create regime-critical work – at far greater risk than their western counterparts.

Also undermining the reputation of eastern art were artists who moved west, like Georg Baselitz. Born in the eastern state of Saxony, he moved to West Berlin in 1957 and claimed in 1990 that East Germany’s tight control of the art scene meant there were “no artists in the GDR”.

That sparked a furious “Bilderstreit” or “battle over pictures”. Western critics put off international buyers and easterners found themselves on the back foot. With few commissions, their work was stripped from eastern galleries by new, western directors. Soon, like eastern business owners or factory workers sidelined by western competitors, resentment grew among eastern artists that they were surplus to requirement.

Two years ago, curator Paul Kaiser had enough. He wrote a furious article in a Saxon newspaper, decrying the treatment of eastern artists and challenging gallery directors in Dresden and other eastern cities to open their locked depots, bulging with unseen work.

His attack opened a dam and 30 years of post-wall frustration poured out. The Leipzig show he curated is the third such exhibition in two years. That all were big draws, he says, reflects another forgotten fact: just how popular visual art was in eastern Germany. Far from a middle-class monopoly, the socialist state pushed art for all walks of life. In the 1970s, he says, Dresden art shows attracted more than one million visitors – every 17th East German.

The new shows have lured back some of this audience, shocked by western German claims in the 1990s that their vanished country’s art and artists were worthless.

“It was a deep wound for many, so the Leipzig exhibition was a litmus test,” said Kaiser.

After three decades out of sight, he hopes a critical reassessment of GDR visual art is now possible, offering a new source of inspiration for a new generation of German artists.

“We’ve been fighting for 30 years – since 1945, really – about the paths of visual art in Germany,” he said. “Hopefully now, finally, we can reach a synthesis of German art history, east and west.”