Taoiseach says ‘if anyone should be angry, it’s us’ 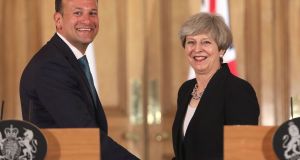 Taoiseach Leo Varadkar has said Ireland is “not going to design a border for the Brexiteers”.

He struck a defiant note at a media briefing in Government Buildings on Friday when he insisted in the strongest terms yet that Ireland did not want an economic border with the United Kingdom after it leaves the European Union.

“What we’re not going to do is to design a border for the Brexiteers because they’re the ones who want a border. It’s up to them to say what it is, say how it would work and first of all convince their own people, their own voters that this is actually a good idea,” Mr Varadkar said.

Mr Varadkar said there was a political border between the Republic and Northern Ireland, but not an economic one.

“As far as this Government is concerned there shouldn’t be an economic border. We don’t want one,” he said.

“It’s the UK, it’s Britain that has decided to leave and if they want to put forward smart solutions, technological solutions for borders of the future and all of that that’s up to them.

“We’re not going to be doing that work for them because we don’t think there should be an economic border at all. That is our position. It is our position in negotiations with the British Government and it’s the very clear positionthat we have when we engage with the task force that is negotiating on our behalf with the UK.”

Mr Varadkar said an economic border would not be in the interests of the Republic, Northern Ireland or the United Kingdom, “and we’re not going to be helping them to design some sort of border that we don’t believe should exist in the first place”.

He continued: “So let them put forward their proposals as to how they think a border should operate and then we’ll ask them if they really think this is such a good idea because I think it will have a very severe impact on their economy if they decide to go down that route.”

Mr Varadkar insisted he and Minister for Foreign Affairs Simon Coveney’s were in agreement, when asked about a report in the London Times and its Ireland edition that a border could exist in the Irish Sea and free movement would be allowed on the island of Ireland.

“Simon rang me this morning just to discuss this and I assured him that we’re absolutely on the same page on this issue,” he said.

Meanwhile, asked if he was frustrated with the British approach to Brexit talks, Mr Varadkar said: “If anyone should be angry, it’s us, quite frankly.”

However, he said the Government would not get angry but would try to find solutions that would “minimise the damage” to relations between Britain and Ireland, to the peace process and to trading links.