Frank Clarke was only name to go to Cabinet 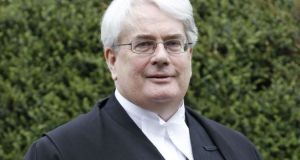 Frank Clarke: he was the first member of his family to go to university

This happened despite a new process insisted upon by Independent Alliance Minister for Transport Shane Ross which resulted in a specially-convened committee sending three names to the Taoiseach’s department on Friday evening.

The other two frontrunners for the position were Supreme Court judge Donal O’Donnell and High Court president Peter Kelly, according to sources close to the process, but the memo Mr Flanagan brought to Cabinet contained just Mr Clarke’s name.

The practice for decades has been for Cabinet to be presented with the name of a single preferred candidate for a senior judicial position after private discussions involving the taoiseach, attorney general, minister for justice and – in coalition governments – the tánaiste.

Given the recent controversy over the nomination of then attorney general Máire Whelan as a judge of the Court of Appeal, however, it was earlier believed Taoiseach Leo Varadkar may have felt obliged to share the shortlist with Cabinet and open the discussion.

It is unclear whether or not other Cabinet members were told who was on the shortlist, although Mr Ross is understood to have been briefed on Tuesday night. But he was not involved in the discussions to pick the new chief justice.

A spokeswoman for the Independents in Government said after Wednesday’s Cabinet meeting Mr Ross was “satisfied” with the process.

The Government spokesman said the intention of the process was to “mirror the spirit” of new draft legislation governing judicial appointments, but “not to every detail”.

The Judicial Appointments Bill, which has been promoted by Mr Ross, will not become law until the autumn at the earliest.

Chief Justice Susan Denham is due to step down after six years as head of the judiciary, and 25 years on the Supreme Court, next month.

The incoming chief justice is a socially liberal judge who is seen as one of the most influential figures on the Supreme Court.

Born in Drimnagh, Dublin, in 1951, he was the first member of his family to go to university. Mr Justice Clarke joined Fine Gael in the summer after leaving Drimnagh Castle CBS and began to canvass for Jim Mitchell in Dublin South West. Later he wrote speeches for Garret FitzGerald and was election agent for the former Fine Gael TD George Birmingham, who is now a judge on the Court of Appeal. He also ran unsuccessfully for the Seanad in the 1980s.

He was head-hunted for the High Court in 2004 by the Fianna Fáil/PD coalition.