Government must do five things in parallel as negotiations progress 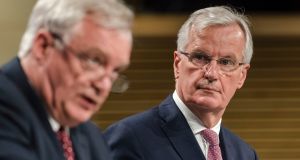 The second round of Brexit talks have come to a close in Brussels with both sides keen to project a sense of progress and common purpose. But that pretence has been possible only because substantive exchanges on the knottiest questions have yet to begin. Scratch the veneer of diplomatic bonhomie on display yesterday between Michel Barnier and David Davis, chief negotiators for the EU and the UK, respectively, and the gaping chasm between the two sides becomes apparent.

Take one of the first items on the agenda: citizens’ rights. A British paper on the treatment of EU and UK citizens living in the other’s jurisdiction was widely welcomed as a good start. But after four days of meetings this week, it became clear that negotiators now face complex and fraught discussions over British citizens’ rights to move between EU states as well as reciprocal health, education and employment rights.

Even more contentious questions await, not least the size of the divorce bill London will have to pay. The figure has been widely estimated at some €65 billion, but both sides have wisely agreed first to settle on a formula for calculating it. Doing otherwise would at best delay the talks and at worst collapse them.

So far London’s approach to Brexit has been marked by astonishing recklessness and a woeful lack of preparation, but there are tentative signs of a fresh realism. While foreign secretary Boris Johnson was suggesting the EU could “go and whistle” over the exit bill, London within 48 hours conceded the principle that it has debts to pay to the EU. That qualifies as progress.

Watching the negotiations perhaps more anxiously than any other EU capital is Dublin. The Government’s unique concerns, in particular on the Border, the peace process and the Common Travel Area, have been publicly recognised as priorities both by London and the EU27.

As the talks progress, however, the Government must do five things in parallel. First, it must be vigilant to ensure these issues remain at the top of the agenda when the talks turn acrimonious and the inevitable horse-trading begins. Second, it must ensure all departments remain focussed on Brexit and update their contingency plans as required. Third, it must do everything possible to ensure business and the public at large is prepared for what could be a major shock to the economy. Fourth, the Government has to position itself diplomatically in the EU27 so as to avoid being isolated when its closest ally leaves the union. And, finally, it must be alive to the windfall benefits of Brexit, notably by working hard to attract some of the investment that will inevitably flee Britain. While mourning the death of British internationalism, Ireland cannot be squeamish about picking at its carcass. Hope for the best, in other words, but prepare for the worst.