Coveney says there is ‘no proposal’ for Irish Sea border

Government says onus on Britain to come up with border solution 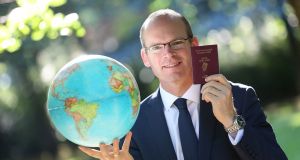 Simon Coveney as he recently announced that over 500,000 passports have already been issued this year so far

There is no proposal for a post-Brexit border in the Irish Sea, Minister for Foreign Affairs Simon Coveney has aid.

Mr Coveney was being questioned about a report this morning that an Irish Se border was being sought by Dublin as the preferred outcome in the Brexit talks between the UK and the European Union.

The report in the London Times and its Ireland edition suggested that rather than a hard border between Northern Ireland and the Republic a border could exist in the Irish Sea and free movement would be allowed on the island of Ireland. The Department of Foreign Affairs insisted the Government’s approach to the border in Brexit negotiations has been consistent.

“There is no proposal that the border would be in the Irish Sea”, told RTÉ’s News at One. “What we are saying is there is an onus on the UK to come up with imaginative solutions”.

He also responded to comments by DUP MP Jeffrey Donaldson who said a border at sea plan was “utter madness”. It was reported in the London Times and its Ireland edition on Friday morning.

A senior political source said earlier that “the notion of a border at sea has been around for some time and has been articulated in public on several occasions.” A spokesman for the Department of Foreign Affairs, said: “The Government has consistently said that the border issue is a political not a technical matter and it will require flexible and imaginative solutions.

“The risks of a hard border are not solely economic or trade related. It is also about communities and society and there are many factors that will have to be considered.

He said Ireland’s unique concerns and priorities for the Brexit negotiations have been “strongly acknowledged” by both the UK and Ireland’s EU partners.

“The objectives of protecting the Good Friday Agreement in all its parts and the gains of the peace process including avoiding a hard border are shared by all sides.”

Mr Coveney told RTÉ’s later he didn’t agree with Mr Donaldson and denied that his efforts were “damaging” the relationship between Ireland and the UK. “I am a friend of Britain. I went to university there. I have friends there. We have to be honest with each other. Enda Kenny said this is a political matter not a technical matter.”

Mr Coveney said that Britain had made its democratic choice to leave and “the onus is now on them” to ensure that they don’t do any damage to Ireland.

He dismissed Mr Donaldson’s assertion that a technological solution was possible in relation to the border. “The border is 500k long with 400 crossing points. It won’t be possible to put cameras on all of them. I don’t think that’s the approach to take.

Mr Coveney said he was not looking to damage the relationship between Ireland and the UK or Northern Ireland and the UK. He said he could not stand over any solution that threatens the peace process and was trying to find a political solution.

“Any solution should not compromise the Good Friday Agreement.

“It is not an easy process. Ireland has real vulnerabilities.”

He denied that he and the Taoiseach Leo Varadkar were “throwing their weight” around in the Brexit talks because of their new positions. “This is the Irish Government’s position. It is not changing its position. It is going to become very difficult.”

Mr Donaldson earlier accused Mr Coveney of “jumping the gun” after this morning’s story . The story reported British officials were taken aback at what they interpreted as a change in tone taken by Ireland as negotiations on the United Kingdom leaving the European Union continue.

The DUP, which is propping up the Conservative Government in Britain, reacted angrily to the story. Sir Jeffrey said modern technology could come up with a “frictionless border”. He told RTÉ’s Morning Ireland: “I believe it is possible to arrive at this outcome. Modern technology is a wonderful thing.”