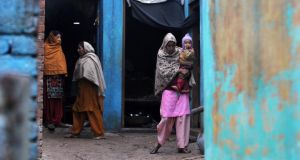 Members of families of Hindu refugees from West Pakistan outside their concrete shanty homes in Surej Chak, on the outskirts of Jammu, in March 2015. Photograph: Tauseef Mustafa/AFP/Getty Images

The scrubby lowlands of Jammu are stuck between the Himalayas and the dusty plains of Punjab, and home to 19,000 families stuck in time. West Pakistan no longer exists on world maps, but in the north Indian state of Jammu and Kashmir, clustered in poor villages along the Tawi river, there are still West Pakistanis.

Like at least 14 million others, they fled their homes during the hasty British retreat from India in 1947, when the division of the subcontinent into one Hindu-majority country and another Muslim-dominated triggered religious violence.

Unlike those millions, the West Pakistanis and their descendants are still officially refugees: citizens of India but stateless inside its borders, barred from local government jobs, colleges and welfare, and unable to buy property or take out loans. They are living embodiments of the lingering scars of partition, 70 years on.

“My home village is 8km from here, in Pakistan,” says Melu Ram, perched on a woven cot outside his concrete house on the outskirts of Jammu city.

A sheet of paper nearby attests that he is a West Pakistan refugee. He has lived in India for seven decades. In West Pakistan – now just called Pakistan after the country’s eastern wing became Bangladesh in 1971 – he spent just a few horrifying days.

“We had to leave our houses on 15 August, 1947,” Ram remembers. The day before, Pakistan had come into existence. “The violence against Hindus started that evening,” he says.

Empty handed, wearing only a shirt and lungi, Ram, his mother and sisters took shelter with other Hindu families in a nearby village. His father had fled to India earlier, carrying their most important possessions in a trunk. His grandfather, too frail to make the journey, stayed behind.

“He was not touched,” Ram says. “But our valuables, cows, and clothes were taken by our neighbours and other villagers.”

Others among the Hindu refugees were less fortunate. “Families had chopped limbs, their noses had been cut off, or their breasts. Many male family members were killed,” he says.

He saw similar violence once the family crossed the river into Jammu, Indian territory. “I have walked on dead bodies,” says Ram (86), his cloudy eyes widening.

“Whoever tried to cross from Pakistan was killed. Muslims killed Hindus. And hearing the stories of those who migrated from West Pakistan, people already living here became angry. Mobs from Hindu villages started killing Muslims.”

Ram joined the column of refugees gradually making their way south through Jammu and Kashmir state towards Punjab. Trailing them on the path was a man known as the “Lion of Kashmir”. Sheikh Abdullah, a towering politician, was by then running an emergency administration in the state.

“He was going from here to the Punjab border, motivating those migrating towards the relief camps in Punjab to stay here,” Ram says. “He assured our family and other migrants that the land was empty, no one was cultivating it, and we should remain.”

Ram and his family made the decision to turn back to Jammu. “I regret it more than anything,” he says.

Jammu and Kashmir is a unique Indian state. It maintains its own flag and constitution. Successive wars have left it divided between Pakistan, India and China. It is India’s only Muslim-majority state. Most crucially for refugees from West Pakistan, when the state’s leaders agreed to join the Indian union in 1947, they demanded special guarantees of autonomy – including to restrict other Indians from becoming citizens of the state.

Its relationship with the rest of India is still uneasy. In the northern Kashmir region, separatist movements and armed militias have fought for 30 years to join Pakistan or become independent. Central governments in Delhi have also spent decades eroding the state’s political autonomy.

In this combustible atmosphere, no state government has shown an appetite for integrating hundreds of thousands of overwhelmingly Hindu refugees.

Among the cruellest consequences of the limbo West Pakistanis inhabit is that it also extends to their children. Roop Lal was 15 when he discovered he was a refugee in the country where he was born and had lived his entire life.

“I was not allowed to apply for scholarships for my last years of schooling. I asked my parents why. They said we were West Pakistanis,” he remembers.

Until a recent legal change, any woman he married would also have become a refugee, surrendering her state citizenship. “We don’t get daughters for marriage from permanent residents,” he says.

Several times, families have approached him to marry their daughters. “Later they learn about my status, and the engagements are broken off. It often happens,” he says.

No West Pakistanis own their homes. Many live on the properties of Muslims who were killed or fled Jammu in 1947, which they rent from the government for a token sum.

Moving elsewhere is a constant temptation. Lal and the estimated 19,960 West Pakistan families living in Jammu are Indian citizens, and in a state without autonomous status would be granted their complete rights.

“A few of my relatives are in Punjab,” he says. “There the tag of West Pakistani is forgotten. Only we are still called that. But we have established our house, our social circle here. We don’t have the finances to move, or anywhere to live there. We’ve been here for 70 years.”

Perversely, just as in 1947, politicians continue to encourage West Pakistanis to stay. “Every election, the central government and local politicians of all parties assure us we will soon get our rights,” says Labha Ram Gandhi, the president of the West Pakistan Refugee Action Committee.

“It’s due to these hollow assurances we’ve been suffering. If they just told us clearly we would get no rights, we’d have thought otherwise about staying.”

The fate of the refugees is front-page news again. India’s supreme court is hearing arguments in favour of scrapping Jammu and Kashmir’s political autonomy. In Delhi, the official position of the Hindu nationalist government of Narendra Modi is also for extinguishing the state’s special status.

Gandhi met Modi last year. He says he begged the prime minister to move his community en masse to other states. “He told me, you have a duty to stay. You are living on the border areas with Pakistan. If you shift, these areas will become abandoned.”

In 1979, West Pakistanis protested for their citizenship by trying to cross the border back into Pakistan. They were stopped by Indian troops. Nearly four decades later, Gandhi is threatening another dramatic step. “We are hopeful about this government,” he says. “But if they fail to fulfil our wishes, we will take up arms.”

On the outskirts of Jammu, Melu Ram is watching his grandchildren arrive home from school. They are still too young to know they are different from their classmates. He hopes never to have to tell them. “Before my last breath I want to see my children getting their rights,” he says. “That’s my only desire.”