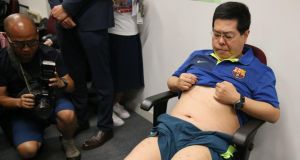 Howard Lam claimed he was abducted by Chinese security officials who punched staples into his legs after he tried to pass an autographed postcard of Lionel Messi to Liu Xia. Photograph: AFP/Getty Images

Almost 70,000 people have signed a petition urging China to lift restrictions on poet and artist Liu Xia, who has not been seen since the death of her husband, the Nobel Peace Prize laureate Liu Xiaobo, a month ago.

Liu Xiaobo died of liver failure on July 13th while on medical parole. He was jailed for 11 years in 2009 for subversion after he co-authored the “Charter 08” democracy manifesto.

The last time she was seen was in a video released by authorities showing Liu Xiaobo’s ashes being scattered at sea.

Liu Xia has never been formally charged but has been under house arrest since 2010. She had been allowed to stay with her husband in the hospital in Shenyang in northeastern China during his final days.

The Chinese foreign ministry rejected calls for her to be allowed to move freely, saying the issue was a domestic matter and that foreigners were “in no position to make improper remarks” over the handling of Mr Liu’s case.

Amnesty organised an open letter to President Xi Jinping in which nearly 70,000 people call on the Chinese authorities to lift all restrictions on Liu Xia and ensure she can travel freely.

“Liu Xia’s immeasurable loss is being callously compounded by the Chinese authorities’ vindictive and illegal attempt to silence her. Our message to President Xi is clear: end the harassment and free Liu Xia now,” she said.

During her period under house arrest, she was allowed to leave her apartment to visit her husband in Shenyang once a month. Her friends say she has suffered great mental anguish during her time in unofficial custody and she was diagnosed with depression in 2014.

World leaders such as German chancellor Angela Merkel have raised her case.

Meanwhile a prominent democracy activist in Hong Kong has claimed he was abducted by Chinese security officials who punched staples into his legs after he tried to pass an autographed postcard of Barcelona footballer Lionel Messi to Ms Liu.

Howard Lam claimed that he had been abducted and tortured on Thursday night, three days after a mainland acquaintance warned him not to pass the Messi postcard to Liu Xia. Liu Xiaobo had been an avid soccer fan and was a particular fan of the Argentine striker.

Howard Lam, a key pro-democracy activist in the former British colony, said he was even told in a telephone call not to give a photo signed by Barcelona footballer Lionel Messi to the widow of Chinese dissident Liu Xiaobo.

Mr Lam said the men abducted him, then interrogated him and stapled his skin 21 times, accusing him of being “unpatriotic”. They eventually knocked him out and left him on a beach in the Sai Kung district.

Hong Kong reverted to Chinese rule in 1997 but its constitution guarantees autonomy “for 50 years no change” after 1997 under a “one country, two systems” model.

There is a growing perception that Beijing has been becoming more involved in Hong Kong’s affairs, with the abduction across the border by mainland agents of five Hong Kong booksellers and pressure from Beijing to disqualify pro-independence politicians elected to the city’s Legislative Council.