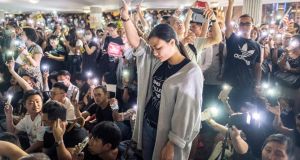 Chinese president Xi Jinping has warned that efforts to divide China will end with “bodies smashed”, as Hong Kong witnessed an escalation in violent protests over the weekend with the explosion of a small bomb and the slashing of a police officer.

“Anyone who attempts to split any region from China will perish, with their bodies smashed and bones ground to powder,” Mr Xi said during a state visit to Nepal on Sunday. “Any external forces that support the splitting of China can only be regarded as delusional by the Chinese people.”

Since the pro-democracy protests began in Hong Kong four months ago, Beijing has blamed “external forces” and “foreign black hands” for fomenting the unrest and interfering in China’s domestic affairs.

The severe caution, Mr Xi’s first public comments on territorial issues since the start of the Hong Kong protests, will also be seen as a clear shot across the bow for advocates of Taiwan independence and separatists in the Muslim province of Xinjiang, among other flashpoints in the region.

As tensions mount in Hong Kong, police said that a homemade remote-controlled device intended to kill or harm police officers was remotely detonated on Sunday during clashes with protesters, exploding less than two metres from a passing police vehicle. No casualties were reported.

A police spokesman said it was the type of device seen in “terrorist events” around the world, and its use indicated the ongoing clashes had now escalated to a “life-threatening level”.

“These are not protesters, they are rioters and criminals,” he said.

Also on Sunday, a police sergeant was slashed with a box cutter in a metro station, leaving a 3cm wound on his neck. In the incident, which was caught on video and widely circulated, a group of riot police were seen marching through a metro station that had just been vandalised when a man in black lunged out from the crowd and attacked him with the knife. The assailant was tackled and arrested. The officer is reported to be in stable condition.

What started off on Sunday as peaceful rallies in 18 districts across Hong Kong descended into violent chaos as radical elements threw petrol bombs at police stations, and ransacked metro stations and pro-Beijing shops and banks.

The police force is widely despised by the demonstrators, who accuse them of utilising excessive force ever since the initial rallies in June to condemn a now-withdrawn extradition Bill. The movement has snowballed since June and protesters are now demanding an independent inquiry into police actions, an amnesty for the 2,500 protesters arrested to date and the introduction of universal suffrage.

While China has increased its military posturing across the border in recent weeks, and grown its presence in the garrisons in Hong Kong, most observers feel Beijing would be unlikely to send troops out to tackle the protesters, and would consider that a very last resort. In recent comments, officials have said they retain confidence in chief executive Carrie Lam and her administration to handle the situation.

A peaceful rally on Monday night, which organisers said drew 130,000 protesters, appealed to the US Congress to pass legislation that would mandate an annual review of the city’s special trade status, providing an ongoing check on Beijing’s influence.

On Wednesday, Ms Lam will deliver her annual policy address, under acute pressure to find a way out of the current impasse that might appease both the Hong Kong protesters and the Communist Party leaders in Beijing.