Albania braced for another setback on long road to European Union 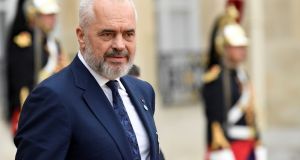 Albania’s prime minister Edi Rama: “In 10 years’ time it will be a different place and we will have a state that functions totally differently.” Photograph: Bertrand Guay/AFP/Getty Images

Psychedelic shapes swarm over the walls of Edi Rama’s office and coloured pencils and paints cover his desk, but they cannot brighten the mood of the art-loving Albanian prime minister as he awaits the European Union’s verdict on his reforms.

While Britain heads for the exit door of the EU, countries in eastern Europe and the Balkans are still eager to join and member states will announce next week whether Albania and North Macedonia are ready to start accession talks.

North Macedonia could receive a green light after changing its name to end a decades-old dispute with neighbouring Greece, but Albania faces further delay due to concerns over organised crime and corruption and the state of its judicial system.

“Am I optimistic? No,” Rama told The Irish Times.

Albania and North Macedonia have strong support from Brussels, which wants to reward them for launching long-awaited reforms

While the Netherlands, Denmark and others want Albania to do more to fight graft and mafia groups, Rama paints his nation as a victim of the EU’s own divisions and a French-led debate over how it should reform before expanding further.

“We are collateral damage,” Rama argues. “When there is bombing somewhere and a kindergarten gets hit – we are the kindergarten.”

Polls show Albanians are eager for EU membership, which they hope will lift their average monthly wage from about €400 and pensions from around €100. But many cannot wait for life here to improve. Since Albania scrapped communism in 1991, some 1.4 million Albanians have left the country, mostly for Italy and Greece.

After becoming an EU candidate in 2014, Albania increased co-operation with the bloc in areas ranging from border security to fighting the drugs trade, and launched a Brussels-backed vetting process to cleanse its graft-riddled courts.

Scores of judges and prosecutors have resigned or been sacked due to these checks on their wealth, integrity and professionalism, but this unprecedented overhaul has also paralysed the legal system, putting thousands of cases on hold.

“They say you have to operate on this body – and we say yes, because this guy has cancer – and then they ask during the operation why he’s not running. Well, first he has to get out of the operating theatre and recover and then he’ll run.”

“We’re not asking to be an EU member next week. We know we can’t do that without a constitutional court. We are asking to start accession talks . . . which could go on for maybe 10 years. So then judge us in 10 years.”

Albania and North Macedonia have strong support from Brussels, which wants to reward them for launching long-awaited reforms and to bind the Balkans to the EU in the face of competition from China, Russia and Turkey.

“The European Union stands before a strategic choice,” top EU officials including the current and future presidents of the European Commission, Jean-Claude Juncker and Ursula von der Leyen, wrote to member states this month.

“If the EU is to uphold its international role and protect its interests, taking a step towards integrating those European countries that have expressed an interest and have fulfilled the requirements for starting the accession process will help achieve this. North Macedonia and Albania did what we asked them to do.”

The German Bundestag voted a fortnight ago to give both states a start date for membership negotiations, but to link Albania’s talks to the completion of tasks ranging from electoral reform to the launch of a special anti-corruption agency.

The hope is that those measures would not only strengthen the rule of law in Albania, but help haul the country of 2.8 million out of a political crisis that has seen the opposition Democrats leave parliament, boycott local elections in June and lead street protests in Tirana that sparked occasional clashes with police.

Lulzim Basha, the leader of the Democrats, hopes EU states agree to start talks immediately, but accepts that the Bundestag’s approach could appease the expansion-sceptics by binding Albania to a timetable for reform.

The Democrats’ 43 deputies gave up their mandates in Albania’s 140-seat parliament in February, after leak of what they call clear evidence that Rama’s Socialists “stole” the 2017 elections with help from criminal groups.

“Albania is probably the first country in modern history without a supreme court, without a constitutional court, without a general prosecutor, with a parliament with unfilled seats, and a prime minister that rules by decree without any institutional limit to his power,” Basha told The Irish Times.

The Democrats backed the root-and-branch justice reform, but Basha says the government has “undermined, violated and abused” the process.

“As a result we have a paralysed judiciary . . . and no politician or organised crime figure has faced justice. On the contrary, a number of high-level corruption cases have been sidetracked under government influence, securing impunity for the accused.”

Rama (55) and his allies are also accused of pressuring critical media, restricting access to information and dodging accountability, with his online channel ERTV – Edi Rama TV – becoming one of the main windows on government activity.

“It’s not about criticism,” Rama says of the lawsuits he has launched against journalists.

“It’s about very heavy accusations: stealing billions, having billions, co-operating with dark forces – concrete stuff, not opinions. I can live with opinions . . . I simply want people to know that all these things are baseless.”

All of this is far removed from the international image of the ex-art student and basketball player as a free spirit and flamboyant dresser who sculpts in his spare time, owns a gallery in Berlin and wears flashy trainers to meet other leaders.

Almost two decades after he became Tirana’s mayor and began covering its dilapidated tower blocks with bright colours and bold murals, some EU leaders remain to be convinced that signs of positive change in Albania are more than skin-deep.

“I don’t regret anything, because this is good for us,” Rama says of the EU’s demand for difficult reforms.

“It’s what we need for our country and our next generations . . . In 10 years’ time it will be a different place and we will have a state that functions totally differently. I’m very confident about that.”