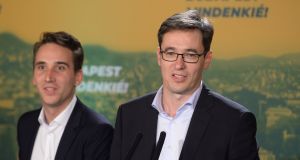 Newly elected mayor of Budapest Gergely Karacsony (right): “This victory is about a green and free Budapest,” he said. Photograph: Zoltan Balogh/EPA

Budapest’s liberal new mayor Gergely Karacsony has hailed a strong performance by opposition parties in Hungary’s local elections as the start of a fightback against the nationalist government of prime minister Viktor Orban.

Mr Karacsony, a former political science lecturer who was backed jointly by several opposition parties, took 51 per cent of votes in the capital on Sunday to oust veteran mayor Istvan Tarlos, who was supported by Mr Orban’s ruling Fidesz party.

“This victory is about a green and free Budapest. This victory was about how the power of the people is stronger than the people in power, how love and co-operation always overcome hatred, and how reality in the end trumps lies,” he told supporters.

“An opposition unity that voters have long expected has been formed, and the result tells us this is the path to take onwards . . . Changing Budapest and the major cities is the first step towards changing Hungary. ”

Analysts said Mr Orban’s first major domestic defeat since returning to office in 2010 suggested that growing dissatisfaction with the standard of healthcare, education and other key services in Hungary was being exacerbated by a steady drip of corruption and sleaze scandals involving Fidesz politicians.

Fidesz still won a majority of votes nationwide, however, and celebrated maintaining its grip on most major cities and securing control of all 19 county councils around the country.

Mr Orban thanked Mr Tarlos for running Budapest for nine years and said that while the city had lost a mayor he had “gained an excellent adviser”.

“He dragged the city out of bankruptcy, thanks to which we have such a beautiful capital today, we can be proud of it,” he said of the defeated incumbent.

Mr Orban also urged people to “keep in mind” his party’s continuing dominance in much of provincial Hungary, and said people there could “rely on us”.

Fidesz has comfortably won national, local and European elections in Hungary since 2010, as opposition parties have struggled to overcome divisions and mount a serious challenge to Mr Orban’s rule. The next parliamentary election is scheduled for 2022.

While maintaining economic growth, low unemployment and pro-family policies, Mr Orban has concentrated huge power in the hands of loyalists while cracking down on migrants and NGOs that oppose his model of “illiberal democracy”.

He has also clashed with the European Union and accused it of meddling in Hungary’s affairs by launching disciplinary proceedings over concerns that his government is undermining the rule of law and democratic norms.