May 12th, 2019: Anti-government protesters in Albania target Edi Rama's office, calling for his resignation over electoral fraud and corruption allegations. Opposition parties have been pushing the government to accept snap elections. Video: Reuters 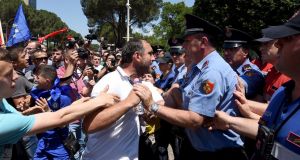 An Albanian opposition supporter clashes with police during a rally called by the opposition to demand the resignation of interior minister Fatmir Xhafaj in Tirana, Albania, in May 2018. His brother was suspected of drug smuggling. File photograph: Gent Shkullaku/AFP/Getty

Klodiana Lala draws a triangle in the air to explain the power structure she explores as one of Albania’s leading investigative journalists.

“I see politicians at the top, and business and crime at the other corners. During my work I’ve discovered many connections between politicians and crime figures,” she says.

“I’ve often got really close to the heart of a story, but then nothing has happened with the case. Because our institutions are weak, they don’t investigate and criminals remain free.”

Journalists who inquire into links between politics and crime face growing legal pressure, insults from top officials and physical threats

Crime and corruption have blighted Albania since it scrapped communism in 1992, and some EU states are expected to cite these factors this week as reasons to again postpone accession talks with this country of 2.8 million people.

While earning praise from Brussels for starting to clean up Albania’s courts, the ruling Socialists of prime minister Edi Rama are also accused of having ties to underworld figures and trying to stifle media that do not toe the government line.

Long known for its cannabis crop, Albania is now also a transit state for heroin and cocaine, and journalists who inquire into links between politics and crime face growing legal pressure, insults from top officials and physical threats – as when the home of Lala’s father was strafed with bullets last summer when her two young daughters were asleep inside.

Albania plunged into political crisis this year with the publication of wiretaps from a drug-trafficking investigation that allegedly showed how crime figures had used their influence to help the Socialists win the 2017 parliamentary elections.

At the same time, Saimir Tahiri, an ex-interior minister and close ally of Rama, went on trial for drug smuggling after calls intercepted by the Italian police suggested he was helping a gang that included his distant cousins.

“State capture and autocracy,” is how Lulzim Basha, leader of the opposition Democrats, describes the situation in Albania.

His party tore up its mandates and left parliament in February, boycotted local elections in June and led street protests to demand Rama’s resignation and snap national elections; amid all that, prosecutors launched a money-laundering case against Basha, which he dismisses as politically motivated.

Have we broken the connection between high-level authorities and the underworld? Yes

No one has been charged over the “election-gate” wiretaps, and last month Tahiri was acquitted of drug smuggling and put on probation for abuse of office.

“Whatever the government claims,” Basha says, “every Albanian knows that the culture of impunity lives on.”

Rama doubts that EU members will give the green light for accession talks this week, but insists that change is real in the country he has run since 2013.

“Have we broken the connection between high-level authorities and the underworld? Yes. Have we to deal with connections between the underworld and segments or individuals or groups within agencies? Yes. But everywhere is the same,” he told The Irish Times.

“Frankly, I think the whole drug issue in Albania would not be enough to compete with the drug issue in one European port,” says Rama. “But it’s in human nature . . . that when you have someone to blame, you blame them; and when someone is weaker, then they’re easier to blame.”

The EU lauds Albania for significantly cutting illicit cannabis cultivation since 2016, but also notes a rise in drugs moving through the country from South America and Central Asia; in February last year, police in the Adriatic port of Durres found 600kg of cocaine hidden in a ship carrying bananas from Colombia.

That one haul had an estimated market value of €180 million, and the cannabis trade was formerly thought to be worth about half of Albania’s GDP – huge sums in a land where the average worker makes €400 a month.

Journalists tracing these cash flows face threats from crime gangs, but some also feel pressure from media bosses who want to shield political or business allies from scrutiny and from a government that is tightening its grip on the media.

Two high-profile political talk shows were cancelled this year after they strongly criticised the government, though the station’s owner denies this was why they were dropped; the host of one of the programmes, veteran journalist Ylli Rakipi, is among several journalists to be sued for defamation by Rama.

“When you make accusations and distort completely the reality to tell the people that the guy in the highest office is just a criminal . . . then I say, it’s easy: just bring a single proof to court and I will go,” says Rama.

At the same time, press freedom watchdogs have criticised Rama’s plans to introduce strong state oversight of online media, and the denigrating language that he and other prominent politicians use about the media.

“There is total impunity on threats against journalists,” says Flutura Kusari, legal adviser for the European Centre for Press and Media Freedom.

“There are serious problems with corruption and mafia in Albania and lots of weapons that are uncontrolled. I’m very worried that this will translate into violence against journalists.”

Luigi Soreca, the EU ambassador in Tirana, is also concerned about how politicians insult reporters and the government seeks to regulate their work online.

Soreca believes membership talks for Albania are merited and would re-energise the country’s reforms, and he has particular praise for a clean-up of the courts

“This harsh rhetoric from the political level towards the media should stop. It is unacceptable,” he told The Irish Times.

“Fake news is bad, defamation is bad, but the tools that have been proposed to fight them are probably not the right ones. They need to come through self-regulation and they might take a bit longer here to be developed.”

Overall however, Soreca believes membership talks for Albania are merited and would re-energise the country’s reforms, and he has particular praise for a clean-up of the courts that is “changing completely the judicial landscape” here.

Of about 200 judges and prosecutors whose wealth, integrity and professionalism have been assessed, about 100 have been sacked or resigned, including eight out of nine judges in the constitutional court.

“I expected a large number [to fail] but not this many,” says judge Ardian Dvorani, who survived a vetting process that claimed 15 of his 16 colleagues in the supreme court.

The top-down purge of the judicial system has brought its highest chambers grinding to a halt, however, and Dvorani says the supreme court now has a backlog of more than 33,000 cases – about four years of work at normal pace.

“Some [EU] countries now criticise us on timing and because we don’t have a constitutional court . . . but all these steps are being taken so that we don’t slip back in the future,” Dvorani says.

“The reform is a success for me, so far. The most important thing is that the new judges will take our courts to European standards. I believe other countries in region have the same problems as us but they are not going through this process – they seem to be in a better position, but I don’t think they really are at all.”