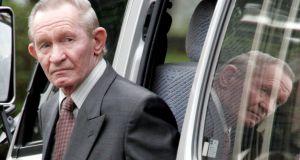 Charles Robert Jenkins: At an emotional court martial in Japan in 2004, Jenkins said he deserted to avoid hazardous duty in South Korea and escape combat in Vietnam. Photograph: Toshiyuki Aizawa/Reuters

A US soldier who deserted to North Korea more than half a century ago, but who was eventually allowed to leave the secretive state, has died in Japan aged 77.

One of the cold war’s strangest dramas began in 1965 when Charles Robert Jenkins, then a 24-year-old army sergeant nicknamed “Scooter” from tiny Rich Square in North Carolina, disappeared one January night while on patrol near the demilitarised zone between the two Koreas.

At an emotional court martial in Japan in 2004, Jenkins – who had never gone to high school – said he deserted to avoid hazardous duty in South Korea and escape combat in Vietnam.

“It was Christmas time, it was also cold and dark. I started to drink alcohol. I never had drunk so much alcohol,” he said in a thick Southern accent, choking back sobs.

He drank 10 beers, took his men on patrol and told them to wait while he checked the road below. He then walked towards North Korea, holding a rifle with a white T-shirt tied around it. He said he had planned to go to Russia and turn himself in, and had not expected North Korea to keep him.

While in North Korea, where he taught English to soldiers and portrayed as an evil US spy in a propaganda film, Jenkins met and married Hitomi Soga, a Japanese woman 20 years his junior who had been kidnapped by North Korea to help train spies.

Fear for his safety and the family he built with Ms Soga made it impossible to refuse any demands made on him, Jenkins said.

“You don’t say no to North Korea. You say one thing bad about Kim Il-sung and then you dig your own hole, because you’re gone,” Jenkins told his court martial, referring to the founder of the secretive state.

Ms Soga was allowed to return to Japan in 2002 and Jenkins followed with their two North Korean-born daughters in 2004.

After serving a token 30-day sentence for desertion, Jenkins moved with his family to Sado, Ms Soga’s rural hometown, late in 2004. He subsequently worked in a gift shop and wrote a book about his experiences in North Korea.

A Sado town official confirmed his death, but could give no further details. – Reuters