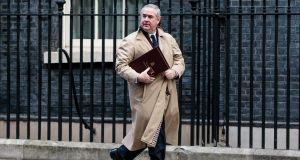 Attorney general Geoffrey Cox leaves following the weekly cabinet meeting at 10 Downing Street on Tuesday. Ministers continue to seek legally-binding changes to Theresa May’s Brexit deal in order to get backing from MPs when they vote on the deal in parliament next week. Photograph: Jack Taylor/Getty Images

The Scottish Parliament and the Welsh Assembly on Tuesday passed identical motions calling on British prime minister Theresa May’s government to rule out a no-deal Brexit and to seek an extension to the article 50 deadline.

Scottish first minister Nicola Sturgeon said the prime minister’s deal would be disastrous for Scotland’s economy and for public services that depended on labour from other parts of the EU.

“The deal on the table guarantees us more years of uncertainty during which Scotland’s interests will be at the mercy of a vicious, seemingly never-ending Tory civil war on Europe – one where I am afraid to say the extreme Brexiteers currently appear to be in the ascendancy.

“ It could open up our markets to US products which for very good reasons are currently banned and it will damage our economy, our living standards and our National Health Service,” she said.

Welsh first minister Mark Drakeford said he hoped the votes in Edinburgh and Cardiff would put pressure on the prime minister to take a no-deal Brexit off the table.

Meanwhile, two car manufacturers warned on Tuesday that they could move production out of Britain in the event of a no-deal Brexit, as a third said that a short delay would make things worse for business.

“We have some flexibility on the engine side with Steyr in Austria. We would need to make some adjustments toward Steyr. We are preparing to be able to do it. Like we are preparing warehouses in the UK to produce cars,” he said.

Didier Leroy, chairman of Toyota’s European operations, said a no-deal Brexit would create “big additional challenges” for its British operation. He said the company had “no plan today” to stop production of its new hybrid-powered Corolla model in Britain but warned that leaving the EU without a deal would make it difficult to introduce new models.

The prime minister has promised MPs a meaningful vote on her Brexit deal by next Tuesday, as attorney general Geoffrey Cox seeks to secure changes to the Northern Ireland backstop.

If the deal is rejected, MPs will vote by March 13th on whether they want to leave the EU without a deal and on March 14th on whether Mrs May should request an extension of the article 50 negotiating period.

The prime minister told the House of Commons last week that if there was to be an extension it should be as short as possible. But Torsten Mueller-Oetvoes, chief executive of Rolls-Royce Motor Cars, warned on Tuesday that a short delay would be no help at all.

“It would make it even worse . . . because then all the prep measurements, in terms of pulling the shutdown forward and so on, would be immediately eroded or not any longer in existence. If a delay is necessary, then it should at least continue for some time,” he told Reuters.