Democrats say they will oppose the move, which would require congressional approval 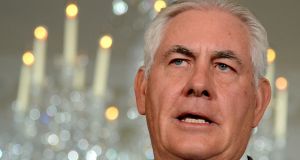 US Secretary of State Rex Tillerson on Monday proposed the abolishment of the US special envoy to Northern Ireland. Photograph: Reuters/Mike Theiler

The US Secretary of State has proposed abolishing the position of US special envoy to Northern Ireland, part of a worldwide plan which will see more than half of the US positions eliminated.

Rex Tillerson proposed the move on Monday in a letter to Senator Bob Corker, chair of the US Senate Committee on Foreign Relations.

Democrats have said they will oppose the move, which would require congressional approval.

The Trump administration has vowed to slash the funding of the state department, which manages the US’s relations with foreign countries and governments. Mr Tillerson has suggested that the special envoys for climate change and the Iran deal, Afghanistan-Pakistan, disability rights, international labour affairs and for closing the Guantanamo Bay detention centre, as well as the Northern Ireland role, will be eliminated under the plan. In all, over half the 66 special envoy position are due to be cut.

The position of US special envoy to Northern Ireland has not been filled by the Trump administration; nor has the post of the ambassador to Dublin. The most recent envoy was the former US senator Gary Hart, though he was the personal envoy of then secretary of state John Kerry, and his appointment lapsed when the Obama administration left power.

Previously Hillary Clinton named the New York based Irish businessman Declan Kelly as economic envoy to the North. The best known special envoy was the former US Senator George Mitchell, who husbanded the Belfast Agreement into existence in 1998.

Congressional Democrats have also said they will oppose the move, with Massachusetts Senator Ed Markey objecting to the elimination of several positions, including the Northern Ireland role.

“None of these are incidental,” Mr Markey told Mr Tillerson, according to US reports. “Each one of these areas has a reason why they have a special envoy.”

However, the abolition of some of the special envoy positions has been on the cards for some years, with criticism in some quarters that their large number reduced the importance of the roles and diminished their impact.

US sources said yesterday that they do not ultimately expect the Northern Ireland job to be among the posts eliminated, though there are no expectations in US circles that the job will be filled in the foreseeable future by the Trump administration.

US involvement in the peace process has diminished substantially in recent years.