The Year of the Pig was Xi Jinping’s annus horribilis

Year in Review: The full horrors of China’s ‘re-education’ camps were exposed this year 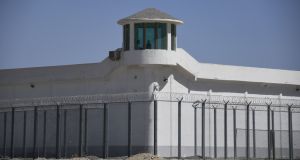 A high-security facility near what is believed to be a re-education camp on the outskirts of Hotan, in Xinjiang. Photograph: Greg Baker/AFP

Chinese astrologers heralded in the 2019 Year of the Pig as a time for riches to flow, a year brimful of joy and friendship. After President Xi Jinping’s annus horribilis he might be questioning their ancient wisdom.

In October he marked 70 years of Communist rule in China with party pageantry and a state-of-the-art military parade in Tiananmen Square, but the year didn’t present him many other great causes for celebration.

It will be remembered in part as the point in time the full horrors of the Xinjiang policies came into sharp and undeniable focus. After three years of evasion and semantics from Beijing, the China Cables and other leaked government documents corroborated many of the details from former detainees in the re-education camps that have housed at least one million Uighurs and other Muslim minorities since 2017.

They show how the “vocational and re-educational training centres” are in effect extra-judicial prisons, where the authorities encourage coercive force, humiliation and punishment to break Muslim inmates down and rebuild them as patriotic, Mandarin-speaking supporters of the Communist Party before they “graduate”.

At the end of the camp’s conveyor-belt system, according to the masterplan, peaceful and productive menial workers are then slotted into assigned labour positions in secular environments, where the rigid supervision, control and indoctrination continues indefinitely.

Now large elements of the policies have been exposed, the Chinese government defends them as deradicalisation and anti-extremism efforts, and argues the international community should appreciate the role they are playing in the global war on terror.

Yet the documents show from the outset the party knew this was a programme that demanded to be kept under wraps, that industrial-level abuse of power such as this required the utmost levels of secrecy. They also show how Xi himself laid the groundwork for the campaign, calling on the “organs of dictatorship” to show “absolutely no mercy” in the “struggle against terrorism, infiltration and separatism”.

The Xinjiang situation fanned some of the anger and angst felt in Hong Kong this year. The glittering skyline has often been clouded in tear gas and lit up by flaming petrol bombs as protesters and police engaged in an ever-descending spiral of violence.

The clock is ticking across Victoria Harbour. When the British sailed out of the colony 22 years ago, a “one country, two systems” model was slotted into place for 50 years, under which the city could continue to enjoy rule of law and civil liberties not available on the socialist mainland for the allotted period.

Now, not even half-way into the term and with the 2047 deadline starting to peer over the horizon, many feel the “mainlandisation” of the financial hub is already well under way. The unique way of life is rapidly dissipating, the protesters say, as rights and freedoms are discarded. There is no end to the strife in sight.

Taiwan is another quandary for Xi, and the narrow straits that separate the mainland from the island have rarely seemed wider. President Tsai Ing-wen takes a derisive view of Beijing and believes in further legitimising the de facto independence the island has enjoyed for seven decades, but early this year she was plummeting in the polls with the pro-Beijing KMT making a resurgence.

As the year panned out though, with local issues meshing with how scenarios like Hong Kong and Xinjiang were playing out on their TV screens, Taiwan’s voters appear to have had a rethink. With an election looming, the anti-China Tsai is now widely tipped to hold on to power, something that will deeply frustrate Xi and his cadres.

In the fractious world of Washington politics, hitting out at Xi’s China was a rare bipartisan endeavour this year, as the House and Senate passed near unanimous Bills on both Hong Kong and Xinjiang.

Elsewhere on the international stage, Xi’s diplomats managed to get embroiled in angry disputes with several nations not typically known for their confrontational diplomatic tacks.

In Australia, for instance, China stands accused of espionage and interfering in Canberra’s affairs, including conducting a spate of cyber attacks on the government.

Canada’s relations with China have gone into a tailspin since Huawei’s CFO Meng Wanzhou, accused of fraud and violating sanctions against Iraq, was arrested a year ago in Vancouver at Washington’s request. In what Ottawa is calling a hostage-taking retaliatory act, two Canadian citizens – former diplomat Michael Kovrig and businessman Michael Spavor – have been sitting in Chinese detention centres for the past year.

Stockholm and Beijing are at loggerheads over Gui Minhai, a Swedish bookseller and publisher who carried books Beijing deemed politically sensitive, and who was abducted by Chinese police from Thailand in 2015. China claims he is a criminal and their embassy in Stockholm has issued no fewer than 57 public statements over the past year condemning Swedish media coverage of the case.

China’s ambassador to Sweden Gui Congyou has threatened serious consequences for Sweden if the support for the detained bookseller continues, recently citing a line in an interview from the patriotic song My Motherland that goes: “We treat friends with good wine, we have shotguns for our enemies.”

Increasingly assertive and ambitious, China sees these clashes as efforts to contain its growth, and as reminders of its painful past.

Xi stills enjoys popular support at home, seen as the steady, if ruthless, hand who can deliver the twin priorities of stability and growth. Dissidents and detractors have been silenced, and despite rumours of inner turmoil he has managed to maintain a unified party façade.

But other issues abound for him, ranging from deep environmental woes to a rapidly ageing population, from soaring debt to a protracted trade war with the US. The 6 per cent growth seen in the last quarter marked the nation’s slowest increase in 28 years.

Next year is the Year of the Rat, and as the first sign in the 12-animal Chinese zodiac cycle it is considered a year of new beginnings, a time to clean slates and start afresh.

After a troublesome 12 months Xi will no doubt welcome that opportunity.