China claims it has freed Uighurs and other minorities in Xinjiang

‘All the trainees . . . have completed their studies,’ says governor, without evidence 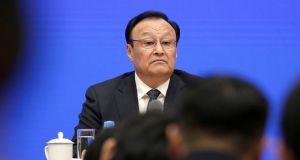 China has claimed that Uighurs and other minorities believed to be detained in Xinjiang have been freed, repeating claims made previously but offering no evidence of their release.

In response to growing international criticism of the detention of as many as 1.5 million people in re-education and other internment camps, the Xinjiang governor, Shohrat Zakir, told reporters in Beijing that they had “returned to society”.

China has long said it does not run what witnesses and human rights advocates have described as re-education camps, where detainees are forced to undergo political indoctrination, but offers free “vocational training” to residents who attend voluntarily.

Mr Zakir said on Monday: “At present, all the trainees who participated . . . have completed their studies, found stable employment with the help of the government and have improved their quality of life and live a happy life.”

However, classified government documents seen by a media consortium, including The Irish Times, have undermined those claims. The documents outline a strategy to detain ethnic minorities who have not committed crimes for the sake of “educational transformation”. The directives include security measures to ensure “no escapes” and that “students” should be held for at least one year.

Uighurs and Kazakhs outside China have told the Guardian that their family members in Xinjiang remain detained in camps. Those who are not already in the camps are subject to constant surveillance, including having Chinese officials living in their homes, and live under the threat of being sent to a centre.

Mr Zakir said those reports were “pure fabrication” but declined to give the number of those attending the centres. He said the number of people who took part was “dynamic” and could not be estimated.

In recent days, Beijing has mounted an aggressive propaganda campaign in response to growing criticism of its policies in Xinjiang. Last Friday the state broadcaster CCTV released a documentary called Fighting Terrorism in Xinjiang, which included footage of terrorist attacks. Over the last year, China has put on several curated, state-organised trips to the region.

The remarks represent an escalation in rhetoric directed at the US, as Washington and Beijing remain locked in a trade war that has lasted more than a year. Beijing has also labeled the US a “black hand” behind ongoing anti-government protests in Hong Kong.

Last week, US politicians passed legislation that would sanction Chinese officials involved in the crackdown in Xinjiang.

Mr Zakir said: “The US is getting restless and has launched a smear campaign against Xinjiang. But no force can stop Xinjiang’s progress toward stability and development.

“When the lives of people of all ethnic groups in Xinjiang were seriously threatened by terrorism, the US turned a deaf ear. Now that Xinjiang is steadily developing and people of all ethnicities are living and working in peace, the US feels uneasy, and attacks and smears Xinjiang.” – Guardian