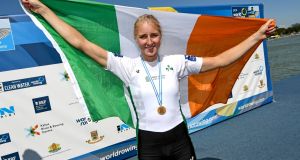 They were desperate hugs. Sanita Puspure, the new world champion single sculler, came off the water and enveloped family and supporters and a close friend from Latvia. And then something delicate and revealing. Aifric Keogh, along with Puspure one of the leaders in the athletes’ group, stepped into the em- brace of the golden girl and broke down.

Keogh (26) had put in the hours, the days, the years of training just like Puspure. The day before the Galway woman had her own historic moment in Plovdiv in Bulgaria. She and Skibbereen’s Emily Hegarty had become the first Ireland women’s pair to compete in a World Championship final.

A short few hours after the celebrations Keogh and the other women in the team had hauled themselves out of bed to be with Sanita. The 36-year-old who had learned her rowing in her native Latvia hated rough water. It had ruined her chances of a medal at the Olympic Games in 2016. The morning was windy. She would lie awake and listen to its taunt. But she would not be alone.

Puspure’s was the pearl on the end of a string of sparkling achievements for Ireland this year. Paul and Gary O’Donovan had won a gold medal in the lightweight double – the first win in an Olympic event at a World Championships by an Ireland crew. The World under-23 Championships had brought gold and silver, the European Championships silver for the O’Donovans. At junior level, girls and boys stream into rowing clubs. They look to the stars: Puspure and the O’Donovans. And they learn about what is is like to be part of a crew, to have the support of a team.

It is also a Sanita Puspure moment. The best woman rower in the world stands in a long corridor of Frankfurt Airport with husband Kaspars and children Patrick and Daniella, and scrolls on her phone. She gets angrier and angrier. Weeding its way through congratulatory messages and tweets of praise is a strain of sarcastic questioning. A journalist suggests she may be on drugs. He has never met her and he does not even name her. Puspure, who is no slouch on social media, wants to tear into him. She speaks graphically of the indignities she goes through to give a sample in a drug test. The testers turn up regularly at their home in Cork, unannounced and at unexpected hours. “Dani and Patrick know them now!” She sighs. The anger subsides; she will not indulge in a Twitter row. Her detractors are on low ground, she has the high ground. She is the champion of the world.