‘The happiest day of my life’: US-China relationship ends in Chengdu

China has taken over the US consulate in the southwestern city of Chengdu in retaliation after they were removed from the Chinese consulate in Houston, Texas. Video: Reuters 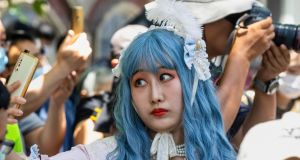 A woman takes a selfie in front of the building of the former US consulate in Chengdu. It was ordered to cease operations. Photograph: Alex Plavevski

As the CNN crew tried to shoot a live broadcast in front of what was now the former US consulate in Chengdu, a group of Chinese patriots attempted to drown the reporter out in song.

“Without the Communist Party there would be no new China, ” they sang at the top of their voices, a classic in the party’s repertoire and one favoured by Mao Zedong and featured in the iconic 1965 propaganda musical The East is Red.

Several played the song on their phones, waving them above their heads, with the tune accompanied by video clips of storming People’s Liberation Army troops.

Despite the militant images, the mood was good-natured and the American news crew took it in their stride, singing and humming along with the crowd at times.

They were all gathered to witness the end of a 35-year relationship.

At 6.18am on Monday morning, the US flag was slowly lowered in the consulate courtyard, folded by a marine and handed to Jim Mullinax, the US consul general in the southwest city of Chengdu.

“I hereby officially retire our national colours and present them to you in recognition of the official closure of the United States consulate in Chengdu, China,” the detachment commander said, in footage released by the mission.

The Americans then departed the building and a few hours later, at 10am, a group of Chinese officials and workers in hazmat suits got out of a minibus and entered the former consulate through the front gate.

For the next several hours workers pulled down or covered up all remaining US emblems and signage outside, including notices about English-language library opening hours and visa application details.

The stark white walls represented the new low point in deteriorating bilateral relations after a dramatic diplomatic week that began with Chinese consulate employees in Houston seen burning documents in a courtyard.

China demanded the US vacate the consulate in Chengdu, the provincial capital of Sichuan, as a retaliatory measure after the US gave the Chinese mission in Houston a 72-hour eviction notice last week, claiming the facility was a centre of espionage and corporate and medical research intellectual property theft.

The episode has seen relations between the two biggest economic powers plummet to the lowest point in decades, with tensions already strained over a range of issues – from the coronavirus outbreak, to trade and tech disputes, to China’s territorial claims in the South China Sea, to its crackdowns in Hong Kong and Xinjiang.

For some in the Chengdu crowd, Monday was a glorious day.

“I am so happy. This is the happiest day of my life,” said one middle-aged woman surnamed Zhang, who was waving a small Chinese flag. “This is my territory. We have kicked the spies out.”

Many of the Chinese onlookers were not so jubilant, however.

“Stop embarrassing us,” a young man hissed at the woman. “You don’t represent us all.”

He said he thought China and the US were like an old married couple who often bickered.

“They fight every now and then, but soon they will realise they still love each other somehow,” he said.

The jocular crowd outside the consulate on Monday night was taking bets on what the government would now do with this huge empty building that was located on a prime piece of real estate in central Chengdu, a city of 14 million people.

One option proffered was a public toilet, a popular choice among the American critics in the crowd, while several suggested a hotpot restaurant, in homage to Sichuan’s legendary culinary traditions.

But the most popular choice was to open a mega Huawei telecommunications superstore, a jab at the US and its efforts to curtail the international growth of the Chinese 5G giant.

One young woman disagreed with all options. “We should leave it empty. They will be back, they should be back,” she said, pointing to a video on her phone that the US embassy released on Monday.

“The US consulate in Chengdu has been proudly promoting the mutual understanding between Americans and the people in Sichuan, Chongqing, Guizhou, Yunnan and Tibet since 1985,” the statement said.

“We will forever miss you.”