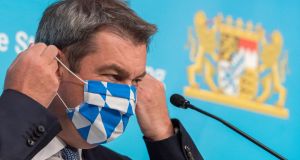 Germany’s Robert Koch Institute (RKI) for disease control has noted a “worrying” decrease in the number of federal states registering no new virus cases – amid a series of new hot spots on a Bavarian farm and in meat factories.

“Rising infection numbers are reason for concern,” conceded Dr Helge Braun, chief of staff in the Berlin chancellery, on Monday.

Early testing and isolation measures helped Germany keep its first wave in check and saw the country well down the international list of infections and fatalities. But official figures on Monday showed 340 new cases in the previous 24 hours and 3,405 in the last seven days.

Two-thirds of cases are now being registered in Germany’s three most populous states: North Rhine-Westphalia, Baden-Württemberg and Bavaria.

Leading the push for more rigorous testing is Bavarian state premier Markus Söder, announcing new test centres on Monday for air and rail passengers in Munich and Nuremberg as well as at three points of the Autobahn network near its border to Austria.

“We cannot completely prevent corona, so the goal must be to detect it in time to stop it from spreading,” said Mr Söder.

The Bavarian leader, with ambitions to become Germany’s next chancellor, has been a visible part of Germany’s pandemic vanguard. He said on Monday the next wave was less likely to be caused by another Ischgl, a nod to the Austrian ski resort that became a super-spreader event in the spring, but “many little Iscghls”.

Some 500 seasonal fruit harvest workers have been quarantined on a Bavarian farm to contain an outbreak that has seen 174 people – mostly from Hungary, Romania, Ukraine and Bulgaria – test positive for Covid-19.

“We have to prevent that returning travellers infect others unwittingly and trigger new chains of infections,” he said.

The tests will be obligatory for returnees from countries on Germany’s risk list, including the US and Israel – but not Spain.

Dr Merkel’s chief of staff Helge Braun indicated a law change to demand mandatory testing might be in the best interest of public health.

“Most people who take up the voluntary offer for tests) are the ones who take care when they are on holidays, [unlike] those who are careless,” said Dr Braun said in a radio interview.

A mass test of 1,600 people is under way in the popular Austrian destination of St Wolfgang on Wolfgangsee lake after 52 locals and one guest tested positive. Some 400 further test results were still outstanding on Monday.