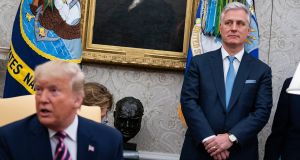 US national security adviser Robert O’Brien has tested positive for coronavirus, the White House announced on Monday, making him the most senior member of the Trump administration known to have contracted the virus.

A White House official said that Mr O’Brien, who succeeded John Bolton as national security adviser last year, was self-isolating and working from a secure location.

“National Security Adviser Robert O’Brien tested positive for Covid-19. He has mild symptoms and has been self-isolating and working from a secure location off site,” the statement said. “There is no risk of exposure to the President or the Vice President. The work of the National Security Council continues uninterrupted.”

White House economic director Larry Kudlow said that Mr O’Brien had caught the virus while spending time with his family. His daughter, who is of college age, had fallen ill first, he said.

Leaving Washington for North Carolina, where he was due to visit a facility making components for vaccines for coronavirus, Mr Trump said he had not seen Mr O’Brien for some time. The national security adviser’s office is located close to the Oval Office in the west wing of the White House.

Inside Politics · Repost: Michael Lewis on Cronyism in The Trump Administration & The Unsung Virtues of Civil Servants
Coronavirus Data Dashboard

The infection of a Trump cabinet member came as deaths from coronavirus in the United States continued to rise. The national daily death rate has risen above 1,000 for four consecutive days, while Nevada, Texas and South Carolina also saw their seven-day average for fatalities reach new highs.

Infection rates in states across the south and west have been soaring in recent weeks. On Sunday alone, the United States reported almost 60,000 new cases over the previous 24-hour period, bringing the total number of cases to 4.2 million. But speaking in Florida during a visit on Monday, vice-president Mike Pence said he was “encouraged by the favourable trends here in Florida”.

Meanwhile, on Capitol Hill, Republicans were poised to unveil the latest proposal for a new stimulus programme as the American economy reels from the pandemic. There were reports that the Republican majority in the Senate was considering slashing the current weekly $600 unemployment payment introduced in the first coronavirus Bill to $200, setting up an inevitable battle with the Democratic-controlled House of Representatives.

Some Republicans have argued that the $600 payment disincentivises work, but Democrats want to continue the programme, which is due to expire on Friday.

Democrats presented their own $3 trillion proposal in late May, but Republicans are considering a much more modest $1 trillion package, amid concerns about the level of federal spending.

As the shape and size of the next Covid-19 stimulus package dominated discussion in the US Capitol, a casket carrying the remains of the late John Lewis was brought to the rotunda of the building to lie in state.

Former vice-president Joe Biden was among those who paid their respects to Mr Lewis, a congressman for more than 30 years and an icon of the Civil Rights movement. Mr Trump said he would not be paying his respects to the former congressman during the lying-in-state period. “I won’t be going no,” he said.