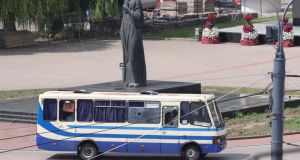 The bus with hostages on a road in the downtown of Lutsk on July 21st. Photograph: Nikolay Martynyuk/EPA 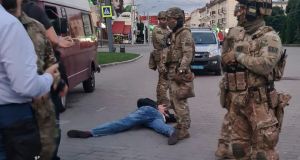 A Ukrainian man has been charged with terrorism after a tense 12-hour hostage crisis that ended in bizarre fashion, when the country’s president complied with his demand to endorse a documentary about animal rights.

Maksym Kryvosh (44) seized a bus with 13 people on board in Lutsk on Tuesday, and threatened to blow it up and detonate a bomb in another part of the western Ukrainian city unless his wishes were met. Officials said he fired shots at the police – though no one was hurt – and threw a grenade that failed to explode.

Mr Zelenskiy said he considered ordering special forces to storm the bus, but spoke to Kryvosh by telephone and agreed to record the video if he first freed three people and promised to release the other hostages once the clip was online.

“Everyone should watch the 2005 film Earthlings,” Mr Zelenskiy said in a post that appeared briefly on his Facebook page on Tuesday evening. About half an hour later, Kryvosh surrendered to police. None of the hostages was injured.

“If we can do something without [ordering] an assault, if we can avoid putting the life of even one person at risk, then ... these are the principles that I live by, that I lived by and will live by,” said Mr Zelenskiy, who was a comedian before entering politics last year.

“The result is that everyone is still alive. We are not fighting for approval ratings, we are fighting for lives. That’s the most important value for me.”

Police said Kryvosh had spent almost a decade in jail for fraud and weapons offences, and now faced charges including terrorism and hostage taking.

“Investigative work is taking place to establish the terrorist’s contacts, where he obtained the weapons, and possible accomplices,” Pavlo Danyukov, regional head of the SBU security service in Lutsk, said on Wednesday.

“Several people have already been detained and information regarding their involvement in this terrorist act is being checked,” he said.

The US embassy in Kiev said it wanted to “join the people of Ukraine in celebrating the safe release of the hostages detained in Lutsk yesterday, and commend Ukrainian authorities’ success in securing their release”.

Ukrainian interior minister Arsen Avakov said: “I want to thank the president for taking a decision that means people are still alive and the terrorist is in handcuffs.

“The film this person talks about is a good one,” he added. “There’s no need ... to create this nightmare for the whole country. You can watch the film without that.”