US congresswoman Alexandria Ocasio-Cortez says congressman Ted Yoho calling her a "f**king b**ch" on the steps of the US Capitol in front of journalists represents a wider cultural issue experienced by all women. Video: Reuters 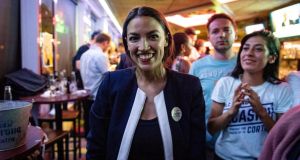 US Congresswoman Alexandria Ocasio-Cortez – “so full of natural political talent, burning so bright, that the 2020 field seems dull next to her lustre”. Photograph: David Dee Delgado/New York Times

President Donald Trump is oh so proud of having mastered the ability to intone, “Person. Woman. Man. Camera. TV.” But the more pressing issue is whether he is a person who can master talking to women through a TV camera without sounding like a caveman.

We continually debate whether Trump is a madman, but there’s no doubt he’s a Mad Man. He’s a ring-a-ding-ding guy, stuck in a time warp redolent of Vegas with the Rat Pack in 1959, talking about how “broads” and “skirts” rate. He was in his element bro-ing out with Dave Portnoy in an interview for Barstool Sports that aired on Friday.

Trump’s idea of wooing the women’s vote, which is decisive in this election, was to tweet out a New York Post story headlined “Joe Biden’s disastrous plans for America’s suburbs” with the directive: “The Suburban Housewives of America must read this article.”

Clearly, the 74-year-old president thinks that American women are in the kitchen; clutching their pearls, a la June Cleaver; sheltered in the ’burbs in their gingham aprons; waiting for their big, brave breadwinners to come home after a hard day’s work manhandling their secretaries.

Trump believes that the coveted electoral cohort that used to be known as soccer moms are actually sucker moms, naive enough to fall for his shtick that the unleashed forces of urban America are marching towards their manicured lawns. How perfect that the president – whose personal lawyer, Michael Cohen, got in trouble over his boss’s porn-star payout – wants to protect the desperate housewives of America.

In a speech on drug prices last Friday, Trump took his strange brand of feminism for a spin, pausing while he talked about middlemen profiting in the Big Pharma arena to say “and women, I guess”. On the Bulwark, a conservative website, Sarah Longwell wrote about her three years’ worth of focus groups with women who voted for Trump in 2016.

She found that they chose Trump over Hillary Clinton because they did not like Clinton and because they felt that Bill Clinton’s bad behaviour with women cancelled out Trump’s bad behaviour with women. But the relationship with women voters has soured, not only because of his pugnacity and bullying but also because of his lack of compassion and competence dealing with the coronavirus and painful issues about race.

“They don’t see Trump as someone who can protect them from the chaos,” Longwell wrote. “They think he’s the source of it.” And his party is on board with the antediluvian vibe. R-Misogyny. Even on the 100th anniversary of women getting the vote, Republicans can’t help themselves. It feels strange to be typing something positive in a sentence with the word Cheney in it, but it was disturbing to see a bunch of MAGA bros in Congress beat up on Liz Cheney because, among other offences to the cult of Trump, she defended Dr Anthony Fauci and shaded Trump on his denial regarding the virus by tweeting a picture of her father in a mask with the hashtag “realmenwearmasks”.

One Trump disciple in the House, Republican Matt Gaetz, tweeted that “Liz Cheney has worked behind the scenes (and now in public) against @realDonald Trump and his agenda.” He added, “Liz Cheney should step down or be removed.”

Donald Trump jnr chimed in on Twitter, “We already have one Mitt Romney, we don’t need another.” (Of course, while it feels strange to be typing something positive in a sentence with the word Trump in it, Donald Trump jnr was right in his second point: “We also don’t need the endless wars she advocates for.” That point was echoed by the president on Twitter. I would never agree with a Cheney’s mindless hawkishness.)

As Republicans sniped, one Democrat soared. Ted Yoho, a Florida Republican, tried to slap down Alexandria Ocasio-Cortez. A reporter overheard him muttering that the congresswoman was “a f***ing bitch” as Yoho walked away after having an argument with her about crime and policing on the steps of the Capitol. Yoho denies he said it.

The youngest woman to ever serve in Congress is so full of natural political talent, burning so bright, that the 2020 field seems dull next to her lustre. It was a remarkable moment on Capitol Hill, where for years superachieving women have let such sexist remarks slide.

She went to the House floor on Thursday and schooled Yoho the Yahoo and the retrograde crowd. “Mr Yoho mentioned that he has a wife and two daughters,” she said. “I am two years younger than Mr Yoho’s youngest daughter. I am someone’s daughter, too.” She added, “I am here because I have to show my parents that I am their daughter and that they did not raise me to accept abuse from men.”

Showing her skill in a generational dimension foreign to Congress until now, AOC posted a video of herself on Instagram Stories strutting to the rap tune Boss Bitch by Doja Cat, her long hair whipping to the music, with the Capitol in the background. “I’m a bitch and a boss, I’m a-shine like gloss.” She captioned it: “Shine on, fight for others, and let the haters stay mad.”

And that’s the way you make Paleolithic men understand that they are history.