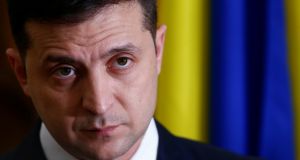 Ukraine’s president Volodymyr Zelenskiy has called for a further exchange of prisoners between Kiev and Moscow. File photograph: Ints Kalnins/Reuters

Government troops and Russian-led separatists in eastern Ukraine have begun a full ceasefire, as Kiev seeks to revive international efforts to end a six-year war that has killed more than 14,000 people.

Ukraine’s army said it had not responded to isolated incidents of gun and artillery fire from militia that control parts of the eastern Donbas region after the ceasefire took effect on Monday. The separatists, who are armed and funded by Moscow, denied breaking the truce.

Both sides say they are ready to respond to any serious breaches in an agreement that calls for a complete cessation of fire from all forms of weapons, following numerous previous attempts to end the fighting that broke down in bloodshed and acrimony.

The office of Ukrainian president Volodymyr Zelenskiy said he spoke to Russian counterpart Vladimir Putin on Sunday and both leaders “commended the agreement on a full and comprehensive ceasefire . . . and agreed on the necessity to urgently implement additional measures to maintain a ceasefire in Donbas”.

Mr Zelenskiy has called for a further exchange of prisoners between Kiev and Moscow, and for a new round of peace talks in the so-called Normandy format, which involves the leaders of Ukraine, Russia, Germany and France.

“This document now awaits the signature of all sides of the Normandy group,” Mr Zelenskiy said of the ceasefire agreement last week.

“I believe that all sides . . . will sign it, and that from [July] 27th the moment could come when we have a full, permanent ceasefire.”

Moscow refuses to give any security guarantees, however, because despite overwhelming evidence of its involvement in fomenting and continuing the war, Russia insists that it is not playing a role in the fighting.

“In this case I don’t think it’s possible to talk about any guarantees from Russia’s side, because it is not Russia that is a participant in the conflict in southeast Ukraine,” Kremlin spokesman Dmitry Peskov said on Monday.

Russia sent fighters and weapons into Donbas in spring 2014, after seizing Crimea in response to a revolution in Ukraine that ousted its then Moscow-backed president and pivoted the country towards the West.

Ukraine signed framework peace deals in the Belarusian capital, Minsk, when it was under huge pressure on the battlefield in 2014 and 2015. They have not been realised, however, and they contain elements that Ukraine sees as a grave threat to its sovereignty, but which Russia insists must be implemented in full.

Mr Putin complained to Mr Zelenskiy about Ukraine’s plans to hold local elections in October everywhere except separatist-held areas – where Kiev says it is impossible to ensure free, peaceful and fair elections under Ukrainian law.

According to the Kremlin, Mr Putin said the election plan ran “contrary to the Minsk agreements and threatened prospects for a resolution” to the conflict.