Voters go to polls on Tuesday after bitterly contested campaign 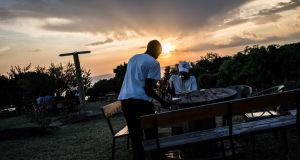 Men spend the evening at an entertainment spot by the lake, at Dunga hill camp, about 5km outside Kisumu, one of the hotspots during the 2007-2008 post-election violence that left more than 1,000 dead. Photograph: Getty

An estimated 180,000 policemen and members of the security forces are being deployed across Kenya as the country prepares to vote on Tuesday in a fiercely contested presidential election.

Voters in the east African nation will either give the incumbent, Uhuru Kenyatta, who has been in power since 2013, a second term or elect veteran opposition politician Raila Odinga.

The country is braced for widespread unrest whoever wins, after a campaign marred by hundreds of violent incidents - including the murder of a high-profile election official - issues with new voting technology and widespread concerns over fraud.

A contested poll in 2007 led to more than a thousand deaths, and violence could sweep the country again if the losing party refuses to accept the result.

Mr Kenyatta (55) called for calm at a church service near his home in Nairobi on Sunday. “Do not allow anything to drive a wedge between you. You have been good neighbours and I urge you to remain so regardless of your tribe, religion or political affiliation,” the president said.

Thousands have been leaving the main cities to head to their home towns to wait out the aftermath of the poll in relative safety. Others have been stocking up on provisions in case of trouble. Streets have emptied, and business has slowed.

“Normally I fill up my matatu (minibus taxi) in 15 minutes but today I’ve been waiting three hours. It’s a disaster. People are fleeing,” said Willy Fiyukundi, a conductor at Nairobi’s central bus station.

Human rights officials, community leaders and politicians have called on voters to “control their emotions and preserve a peaceful environment” when the final results are released.

“If your candidate wins, do not rub other people’s noses in it, and if your candidate loses, suffer stoically and do not let Kenya down. We must hope for the best but be prepared for the worst,” said Kagwiria Mbogori, the chair of the Kenyan National Commission on Human Rights.

Ms Mbogori said the KNCHR was concerned about “cowardly leaflets” threatening candidates and warning voters “of certain ethnic origins to flee or else” circulating in local campaigns. She also called on security personnel to avoid the use of excessive force. In 2007, many casualties were the result of police using live ammunition against protesters.

Local contests for appointments as governors, members of the lower house, senators, county officials and women’s representatives involve 16,000 candidates and are seen as potential flashpoints.

In Mathare, a poor area of Nairobi, several people were wounded and one killed over the weekend as rival supporters clashed with machetes and guns.

Nineteen million voters, half of whom are under 35, have been registered. Prisoners are able to vote for the first time. Recent opinion polls have not indicated any clear leader in the campaign and turnout will be a key factor.

Political allegiance in Kenya often reflects ethnic identity. Mr Kenyatta’s Jubilee Alliance is largely supported by Kenya’s larger Kikuyu and Kalenjin tribes, while Odinga has a following among the country’s smaller communities, such as the Luo.

Many Kenyans downplay ethnic factors, pointing to issues such as rising prices of staple foodstuffs, allegations of corruption and high unemployment instead.

“It is not about tribes. It is about corruption. Bread costs the same which ever tribe you are from. This government is not delivering development to the ordinary man and woman. They are heartless people,” said Paul Ouma, manager of a bus company, who said he would be voting for Mr Odinga.

Mr Ouma said violence could be avoided if there was a “fair and transparent” ballot.

between the families of Mr Kenyatta (55) and Mr Odinga (72) that has lasted more than half a century.

Mr Odinga is making his fourth attempt to gain power. He claims that elections in 2007 and 2013 were stolen from him.

Mr Kenyatta would be constitutionally barred from a third term if victorious this time while Odinga would be prevented by age and previous failures from mounting a further challenge in 2022.

A new biometric system of voter identification and counting was introduced after the 2007 election but partially failed in 2013.

Mr Odinga claimed there was vote rigging, however he took his complaints to the courts instead of the streets and despite some rioting after he lost his case, the process ended peacefully.

Fears surrounding the new system were raised last week when the poll commission’s chief IT manager, Chris Msando, was found strangled and tortured in a forest on the outskirts of Nairobi.

Mr Msando, a high-profile figure who had made frequent media appearances, had access to all the new system’s secret passwords and codes.