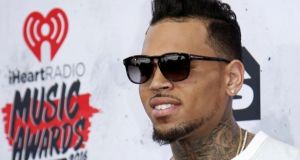 The complaint about Brown was filed with police in the 17th arrondissement of northwest Paris. Photograph: Danny Moloshok/Reuters

R&B singer Chris Brown has been released from custody in Paris over rape allegations against him, officials say.

Brown (29) and two other people were released on Tuesday evening after a woman filed a rape complaint, the city’s prosecutor’s office said.

The Grammy-winning singer was detained on Monday on potential charges of aggravated rape and drug infractions.

The Paris prosecutor’s office said the investigation was ongoing.

According to the celebrity news magazine Closer, which first reported Brown’s detention, his arrest on Monday morning came after a 24-year-old woman filed a complaint against him.

The woman, who was not identified, accused Brown of raping her in a Paris hotel room last week, the magazine said.

The woman told the police that she met the singer on January 15th at a nightclub near the Champs-Élysées, and that later that evening, he invited her and several other women to the upscale Mandarin Oriental hotel, where he was staying, Closer reported.

According to the magazine, the woman told police that she then found herself alone in one of the hotel’s rooms, where she said Brown raped her.

She also accused a friend of the singer and his bodyguard of raping her.

The French judicial official confirmed that two other people were questioned by police in relation to the case, but did not identify them or explain their connection to Brown.

Under French law, suspects being questioned by the police can be kept in custody for up to 24 hours, although prosecutors can extend the duration of their detention.

Brown could be released without charges, or charged and placed under formal investigation.

Brown has been involved in a string of violent episodes over the past few years.

In July, he was arrested in connection with a nightclub dispute from April 2017, when he was accused of punching a photographer in Tampa, Florida.

In May, a woman sued him, saying he had held her against her will at his Los Angeles house last year while a friend of his raped her.

He was arrested in 2016 on a charge of assault with a deadly weapon after a standoff at his home.

In 2009, he pleaded guilty to one count of felony assault on his girlfriend at the time, the singer Rihanna. – New York Times/Press Association