At least one gunman killed 40 people and wounded more than 20 during Friday prayers at two New Zealand mosques in the country's worst ever mass shooting, which Prime Minister Jacinda Ardern described as terrorism. Video: Reuters 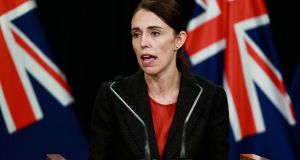 49 people have died and 48 people have been injured following the shooting at the Al noor and Linwood mosques during Friday prayers.

Four people have been arrested and one of the gunmen has been charged with murder.

“These are people who I would describe as having extremist views that have absolutely no place in New Zealand and in fact have no place in the world,” Ardern told a news conference in Wellington. “. . . This can only be described as a terrorist attack.”

She said said that many of the victims were most likely migrants to New Zealand or even refugees. “They are one of us,” she said. “The person who has perpetrated these acts is not.”

When asked about the attackers not being on intelligence agency watchlists, she said it was an indication they “had not acted in a way that warranted it”.

She added: “We have undoubtedly experienced an attack today that is unprecedented, unlike anything that we have experienced before. “But, as I say, New Zealand has been chosen because we are not a place where violent extremism exists. “We reject those notions and we must continue to reject them.

"This is not an enclave for that kind of behaviour, for that kind of ideology. “We will and must reject it. This is a place where people should feel secure and will feel secure. I am not going to let this change New Zealand’s profile, none of us should.”

The events have shocked a nation where gun violence is relatively rare. The death toll, which may yet climb, already makes it the worst mass shooting since a prisoner of war camp riot in 1943, which killed 49.

Christchurch, a city of about 390,000, is still recovering from a 2011 earthquake that killed 185 people and destroyed the central business district. – Bloomberg and PA