UK continues to push for changes to Border backstop

UK Attorney General Geoffrey Cox has said he intends to look inside the Brexit 'codpiece' to ensure it's in working order as the latests talks on the backstop resume. Video: Parliamentlive.tv 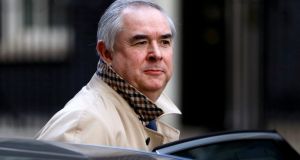 EU Brexit negotiators have rejected Britain’s latest proposals on the backstop and told the UK’s attorney general to come back on Friday with a reworked version, according to EU diplomats.

They said Geoffrey Cox had proposed an arbitration panel to resolve UK-EU disputes which would not be obliged to refer cases to the EU’s top court, the ECJ, whose jurisdiction Britain wants to leave.

Mr Cox has been told by British prime minister Theresa May to secure concessions from the European Union on the backstop proposal, which is part of the withdrawal agreement negotiated by Mrs May and is designed to ensure no hard border on the island of Ireland. The concessions are a key demand of pro-Brexit MPs in the House of Commons who fear being trapped in EU regulations indefinitely.

However, EU negotiators said the Cox proposal would unpick the withdrawal agreement reached by the EU and UK after months of negotiations.

Britain’s parliament rejected that pact, largely over concerns that Britain could be locked in a continued customs union with the EU. The bloc has offered to work on addendums to the text to make it more palatable but refuses to change its substance.

EU diplomats said the Cox proposal provided for an arbitration panel that would decide if enough “good faith” was being shown in negotiating a new deal for post-Brexit trade to obviate the need for customs checks on the Border.

The EU and the UK would then have to go into a “mini-backstop”, which would include fewer checks than the one envisaged in the withdrawal agreement.

“Things are not looking good,” one diplomat said after EU negotiators briefed envoys on the previous evening’s talks with Cox. Another described the mood as “downbeat”, although Brussels insiders were divided on whether Mrs May might yet accept an EU offer by next week - or risk an 11th-hour crisis at a summit on March 22nd.

EU Brexit negotiator Michel Barnier said after more than three hours of talks with Cox that “while the talks take place in a constructive atmosphere, discussions have been difficult,” according to the European Commission spokeswoman.

“No solution has been identified at this point,” the spokeswoman, Margaritis Schinas, told a news conference.

Mr Cox said on Wednesday the previous day’s discussions in Brussels were “robust” and detailed.

A spokesman for Mrs May said technical talks would now continue, but again repeated Britain’s line that the EU has said it wants “this to be resolved.”

“Parliament has been clear that in order for this to happen we require legally binding changes which mean the UK cannot be trapped in the backstop indefinitely, and that is what we will continue to pursue,” he told reporters.

But an EU official said it was unlikely there would be a deal before the weekend, which would mean talks could run close to March 12th, a date by which Mrs May has promised Parliament it will have another vote on her Brexit blueprint.

Britain’s pound remained stuck near a one-week low on Wednesday over the stubborn deadlock in Brexit talks and the lack of prospect for a quick breakthrough.

Britain voted 52-48 per cent to leave the EU in a 2016 referendum, a decision to end more than 40 years of union that has split the country and cast its political system into crisis.

Mrs May’s deal is widely unpopular for failing to satisfy either “Leavers” seeking a complete break from the EU or “Remainers” keen to retain close economic relations.

EU diplomats suggested that, if negotiators managed to clinch a deal over the weekend, Mrs May could come to Brussels on Monday to give it political endorsement and bring it back to London just a day before the House of Commons votes.

The EU’s 28 government leaders including Mrs May will then decide at a March 21st-22nd summit whether to extend the negotiating period beyond the current exit date on March 29th.

Mrs May’s government is pinning its hopes on Cox to secure changes to make the agreement more palatable to parliament, which resoundingly rejected it in January, inflicting a record defeat on a government. - Agencies