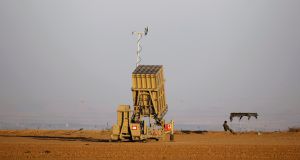 Militants in Gaza have fired two rockets towards Tel Aviv, the first such attack since the war between Israel and Hamas in 2014.

Israel has responded by attacking what it called “terror sites” in Gaza.

There were no reports of damage or casualties, the Israeli army said, and no group in Gaza immediately claimed the attack, but in a statement, Hamas’s military wing denied responsibility for the attack.

As well as the strip’s rulers, Hamas, other armed factions operate in the territory, including Islamic Jihad, an Iranian-backed organisation that has launched rockets in the past.

In Gaza explosions were heard in the north and south of the territory according to Palestinian witnesses who said Israeli planes bombed two Hamas security positions.

As tensions have risen in Gaza over Israel’s lethal response to weekly protests at the frontier during the past year, militants in the enclave have fired hundreds of projectiles into surrounding areas, although not as far north as Tel Aviv.