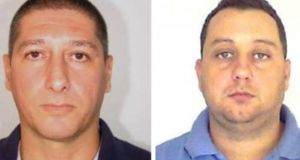 Two former police officers in Rio de Janeiro were charged on Tuesday with the killing of city council member Marielle Franco and her driver a year ago this week.

Retired police officer Ronnie Lessa (48) and Élcio Vieira de Queiroz (46), who was expelled from the force in 2015, were detained on Tuesday morning after being charged with the murders by investigators.

A highly articulate politician who was gay, black and from one of Rio’s shantytowns, Ms Franco was shot four times in the head from a car which pulled alongside the one she was travelling in. Three bullets hit her driver Anderson Gomes, who also died. An assistant to Ms Franco survived the attack.

Mr Lessa, accused of being the gunman, was arrested in the gated community in the west of Rio where Brazil’s far-right president Jair Bolsonaro also lives. Mr Queiroz is named as his driver.

Shortly after the arrests were announced a photo circulated on social media which showed Mr Queiroz alongside Mr Bolsonaro just days before the first round of the presidential election, six months after the killings. He had been expelled from the force for working security at a clandestine casino in the city.

The arrests will refocus attention on alleged links between the Bolsonaro family and Rio’s illegal militias composed of corrupt serving and former police officers. Since the deaths, militias members have been leading suspects in Franco’s murder.

When still a member of Rio’s state assembly, Mr Bolsonaro’s son Flávio, now a senator, employed the mother and wife of Adriano Magalhães da Nóbrega, a former police captain accused of being one of the alleged leaders of the Office of Crime militia, a prime suspect in the Franco killings. He is currently on the run.

In 2007 Flávio backed an initiative to legalise Rio’s militias and last year he was the only member of the state assembly to vote against awarding the recently murdered Ms Franco the body’s highest honour, the Tiradentes medal.

In a statement following the arrests Amnesty International said the investigation into the killings “must continue until those who ordered the attack as well as those who carried it out are brought to justice”. The human rights group has been highly critical of how authorities have conducted the case and is calling for independent specialists to be allowed to accompany police efforts.

Rio’s governor Wilson Witzel said the two arrested men could benefit from plea-bargain deals, presumably if they provide investigators with evidence against those who ordered the killings.