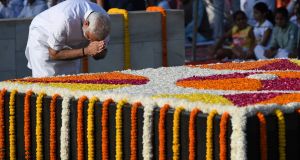 India’s supreme court has appointed an amicus curiae in a petition seeking a new investigation into Mahatma Gandhi’s assassination nearly 70 years ago. It has set October 30th as the next date for hearing the case.

Filed by Mumbai-based Pankaj Phadnis of the right wing Abhinav Bharat, or Modern India, organisation, the petition claims there was not one, but two gunmen responsible for killing Gandhi at an evening prayer meeting in New Delhi on January 30th, 1948.

Seeking to exonerate Nathu Ram Godse, the 39-year-old Hindu fanatic who was convicted of Gandhi’s assassination and hanged in November 1949, the petition avows the judicial commission’s investigation into Gandhi’s killing was the “biggest cover-up in history”.

It goes on to state the three rounds fired by Godse from a 9mm Beretta pistol into Gandhi’s chest at point-blank range at Birla House did not, in fact, kill him.

What actually proved fatal was the fourth shot fired by the mysterious second gunman, it is claimed.

None of the 1,000-plus people who witnessed the shooting reported seeing the second gunman.

The petitioner claims that after Gandhi’s body was carried into Birla House and was being cleansed and bathed for his cremation, the fourth bullet was recovered from the folds of his shawl.

The judicial inquiry into the murder found that only three shots were fired at Gandhi. There were three entry wounds on his chest and two exit wounds on his back.

“For seven decades the proponents of this ideology have orchestrated their lies . . . and now they have taken it to the next level to spread doubts about the murder itself,” he said.

The “ideology” he was referring to was that propounded by the Rashtriya Swayamsevak Sangh (RSS) or National Volunteer Corps, India’s foremost Hindu revivalist organisation, which provides “spiritual guidance” to the ruling BJP. It was founded in 1925 as a paramilitary, volunteer organisation to defend Hinduism, by keeping it “pure” from outside influences such as Islam and Christianity.

Godse reportedly subscribed to similar tenets, murdering Gandhi because of his secular approach to India’s minority, Muslim community and opposition to partitioning India on religious lines and the formation of an Islamic Pakistan.

Hindu activists installed a statue of Godse at Meerut, 70m north of Delhi, last October. “Our step [in installing the statue] signifies that it is time all Indians stop following Gandhi’s footsteps and start worshipping Godse,” said Aashok Sharma of the All India Hindu Grand Assembly, which has links to the BJP.

Life under Level 5: What it would look like for the country