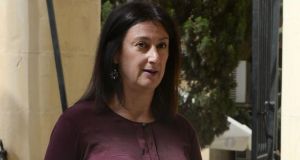 A Maltese investigative journalist who had exposed her EU island nation’s links with the so-called Panama Papers was killed when a bomb destroyed her car near her home on Monday.

Daphne Caruana Galizia (53) had just driven away from her home in Mosta, a town outside the capital Valletta, when the bomb exploded, sending the vehicle’s wreckage spiralling over a wall and into a field.

Prime minister Joseph Muscat acknowledged she was “one of my harshest critics, on a political and personal level”, but denounced the “barbaric attack” as “unacceptable” violence that also assaulted freedom of expression.

Ms Caruana Galizia was named by Politico magazine among the 28 Europeans who are “shaping, shaking and stirring” Europe.

She ran a hugely popular blog in which she relentlessly highlighted cases of alleged high-level corruption.

“There are crooks everywhere you look now. The situation is desperate,” she wrote in a blog published on her site just half an hour before an explosion tore into her car.

She had alleged that Mr Muscat’s wife, Michelle, as well as his energy minister and the government’s chief-of-staff, held companies in Panama, using information in the 2016 document leak. Mr Muscat and his wife deny they held such companies.

Opposition leader Adrian Delia called the killing a “political murder”. The FBI in the US is to aid local police in investigating the killing.

Ms Caruana Galizia had been sued for libel because of various articles she wrote on her blog Running Commentary, and she had filed a report with police two weeks ago that she was receiving threats.

Monday evening’s parliamentary session was scrapped in Malta, except for briefings about the bombing given by Mr Muscat and Mr Delia.

In June, Mr Muscat was sworn in for a second term as prime minister following snap elections he had called to reinforce his government as the Panama Papers leak indicated his wife owned an offshore company. The couple deny wrongdoing.

The Panama Papers, which involved an enormous data leak from the Mossack Fonseca offshore law firm, was a project organised through the International Consortium of Investigative Journalists (ICIJ) and its partner media groups, including The Irish Times. It created shock waves around the globe and a number of political crises.

Ms Galizia’s son, Matthew, works as a data journalist with the ICIJ. Gerard Ryle, director of the Washington DC-based organisation, expressed his shock at the killing of Ms Galizia and said the ICIJ condemned violence against journalists and was deeply concerned about press freedom in Malta.

“The ICIJ calls upon the Maltese authorities to investigate the murder and bring the perpetrators to justice,” he said. (Additional reporting AP)