Artificial intelligence glitch blamed for error, the latest in series of racial incidents in China 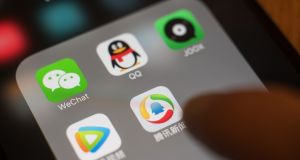 A WeChat spokesperson said it was “very sorry for the inappropriate translation”. Photograph: Anthony Kwan/Bloomberg via Getty Images

China’s most popular social media messaging service, WeChat, has apologised after its algorithm translated a neutral word, commonly used phrase for “black foreigner”, with the N-word.

Theatre director Ann James spotted the racial slur when she used WeChat’s translation bot to tell her colleagues in a WeChat group that she was running late.

She discovered that one of the messages translated from Chinese read “The nigger’s still late”.

“I was just horrified,” Ms James, who is the founder and director of the Urban Aphrodite International theatre group, told the Sixth Tone news website.

Black people regularly complain about widespread racism in China and last year an ad for a major washing powder featured a black man being “washed white” into a light-skinned Chinese man.

The recent hit movie Wolf Warriors 2 featured numerous racist tropes, with characters discussing how Africans were always happy when dancing around a fire and featuring a boy who rolled his eyes while eating. Ms James played a role in the film.

There is also a deep-seated prejudice against dark skin in China, which is associated with too much exposure to the sun, and suggests working in the fields.

“If you’re a black person in China, you’ve come up against some craziness,” she said. “I know there’s a lot of curiosity and a lot of ignorance about black people.”

WeChat is ubiquitous in China, with an estimated one billion active users. It is used as a messaging service but also for cashless payments and as a social media platform.

Ms James said she knew that the Chinese colleague had not intended the message, and had used the neutral Chinese term “black foreigner” and that it was an issue with the software.

“Why is that word even in the translator?” she asked.

The local news site That’s Shanghai reported the story and found that when the word for black foreigner was used with negative terms, it translated with the N-word. The app appeared to have changed the translation on Friday to just use the neutral expression.

In a separate incident, a photographic exhibition in Wuhan that paired pictures of Africans alongside photos of animals wearing similar expressions has caused complaints online.

The exhibition at the Hubei provincial museum was called “This is Africa” and showed the works of Chinese photographer Yu Huiping. The show opened just before Golden Week and had thousands of visitors.

The Shanghaiist website described the exhibition as “astonishingly offensive”.