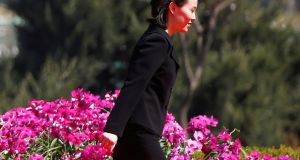 The family resemblance is definitely there, although Kim Yo-jong is much thinner than her brother, the North Korean supreme leader Kim Jong-un. In photographs of this most mysterious of first families, Yo-jong, who since her appointment to the Politburo is probably North Korea’s most powerful woman, you can see the sibling resemblance.

Her appointment to the top echelons of power shows that her brother is keen to copper-fasten the family’s complete control of the domestic power structure as it resists international pressure to abandon the nuclear weapons programme that has been the defining feature of his government since he took over following the death of their father, the strongman Kim Jong-il, in December 2011.

The Kim family is into its third generation of control of North Korea, making it Asia’s most successful communist dynasty. Along with Kim’s wife, Ri Sol-ju, Yo-jong is the only remaining relative in the nuclear-armed state who remains close to the leader, in a family that almost defines the phrase “toxic relationships”.

Kim Jong-un had their uncle Jang Song-thaek blown up with howitzers after he fell out of favour with the young leader. Some say he was then fed to dogs.

Earlier this year, her brother apparently ordered the execution of their half-brother Kim Jong-nam, with assassins smearing him with the deadly toxin VX at Kuala Lumpur airport in Malaysia.

Details are sketchy, but Yo-jong was born between 1987 and 1989, the youngest daughter of Kim Jong-il and Ko Yong-hui, his third and favourite consort. Yo-jong and her brother went to the same international school in the Swiss capital Berne in the late 1990s, where she went by the name Kim Yong-sun.

After completing sixth grade, Yo-jong returned to North Korea and is believed to have taken classes at the Kim Il-sung University. There were various appearances over the years, but it was during the mourning period for Kim Jong-il that she really came to prominence.

Currently she acts in a chief-of-staff role for her brother, a position known as chief secretary.

“She presently works in Kim Jong-un’s executive office where she manages his public appearances – including his itineraries, schedule, logistical needs and security arrangements,” writes Michael Madden in his North Korea Leadership Watch blog.

This is not a policymaking role but is deeply influential because she has access to high-level reports from all the most senior ministries, and she is the first family member to hold the position, a sign that Jong-un is keen to bring even more power into the family. She organises Jong-un’s public appearances and works as his political adviser.

Until last week, when she was named an alternate member of the Politburo, her official role was as vice-director of the North’s ruling Workers’ Party’s propaganda and agitation department.

In the absence of official news, photographs are pored over for what information they can provide, and defectors give some insights too, although they are often contradictory.

Some believe she could take a public role if there are to be negotiations with the US or China over North Korea’s nuclear programme.

There is much speculation about her marriage. In January 2015, it was reported that she had married Choe Song, the younger son of Choe Ryong-hae, the powerful secretary of the Workers’ Party and effectively number two in North Korea, after she seemed to be wearing a wedding ring.

Her husband is said to be part of Office 39, which helps organise overseas currency.

Other defectors say Choe Song was killed in a car accident in January 2013, and that she remains unmarried.

Two years ago there were rumours that she was pregnant after she wasn’t seen for several months.

She is known to the international community, and there are few illusions, especially in Washington, about the kind of role she will play. Along with her brother, Yo-jong has already been blacklisted by the US government for human rights violations and censorship activities.

“Kim Yo-jong’s promotion appears to be a further consolidation of Kim’s family power, and could indicate that she has has developed a close relationship with Kim Jong-un and is trusted by him,” says Paul Haenle, director of the Carnegie-Tsinghua Centre for Global Policy in Beijing.

“Given the continued threats by President Trump and increasingly tense situation on the (Korean) peninsula, the timing of the promotion is noteworthy,” says Haenle.

“Foreign minister Ri Yong-ho, who called Trump ‘President Evil’, was also promoted to full vote-carrying member of the Politburo recently. These promotions could be meant to signal to the international community that the death of Kim Jong-un would not bring an end to the regime or the pursuit of nuclear weapons,” he says.

Yo-jong’s closeness to Jong-un means she is probably being groomed to fill a role once played by their aunt Kim Kyong-hui, Song-thaek’s wife.

Chang Yong-seok, a senior researcher at a Seoul National University institute, told the Yonhap news agency that Yo-jong was more influential than the powerful aunt, “playing a substantive role in creating Kim Jong-un’s image as a people-oriented leader, standing at the core of his efforts to solidify his power base”.

Kyong-hui’s fate is uncertain. Some say she is in a permanent vegetative state, others that she has died or been killed.

There are more family stories. Kyong-hui and Song-thaek had a daughter, Jang Kum-song, a first cousin of the current leader. While studying in Paris in 2006, she had a non-Korean boyfriend and was ordered to return to Pyongyang. Instead, she killed herself.

The leader also has a half-sister, Kim Sul-song, daughter of his father and his father’s third wife, Kim Young-sook. Little is known about Kim Sul-song, but one thing is certain: this is not an easy family to be part of.