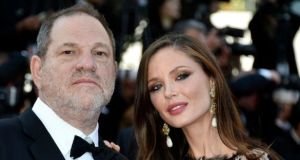 The controversy over film producer Harvey Weinstein deepened on Wednesday as revelations about his sexual behaviour over decades threatened to embroil the Democratic Party.

Mr Weinstein, a longtime Democratic supporter and acquaintance of presidential hopeful Hillary Clinton and former president Barack Obama, was fired by the company he founded, the Weinstein company, on Sunday following revelations that he had made financial settlements with several women stretching back decades.

The New York Times first reported late last week that Mr Weinstein – who produced films including Shakespeare in Love and The King’s Speech – had reached at least eight settlements with women, and had sexually harassed actor Ashley Rudd. Since then, several women have come forward alleging inappropriate behaviour by Mr Weinstein, including household names such as Gwyneth Paltrow and Angelina Jolie. At least three women have accused him of rape.

In a statement to the New York Times following the original report, Mr Weinstein said: “I appreciate the way I’ve behaved with colleagues in the past has caused a lot of pain, and I sincerely apologize for it. Though I’m trying to do better, I know I have a long way to go.” He also said he was working with therapists to “deal with this issue head on”. His wife of 10 years, British designer Georgina Chapman, said on Tuesday that she was leaving him.

As the controversy deepened the scandal threatened to incriminate others in the movie industry. Actor Matt Damon denied reports that he tried to “kill” a story about Weinstein’s behaviour when contacted by a reporter 13 years ago. “I would never, ever, ever try to kill a story like that,” he told online entertainment website Deadline, following a BBC report. “I just wouldn’t do that. It’s not something I would do, for anybody.”

“This type of predation happens behind closed doors, and out of public view. If there was ever an event that I was at and Harvey was doing this kind of thing and I didn’t see it, then I am so deeply sorry, because I would have stopped it.”

As questions emerged as to how Mr Weinstein’s behaviour went unpunished in Hollywood for decades, the scandal also raised uncomfortable questions for the Democratic Party.

The Democratic Congressional Campaign Committee – the official campaign arm of the Democratic Party in Congress – said it would donate all contributions from Mr Weinstein to the campaign organisation, Futures Without Violence.

Hillary Clinton issued a statement on Monday, though she did not state if she would return campaign contributions from the Hollywood producer. “I was shocked and appalled by the revelations about Harvey Weinstein. The behaviour described by women coming forward cannot be tolerated. Their courage and the support of others is critical in helping to stop this kind of behaviour,” she said.

President Barack Obama, whose daughter Malia undertook an internship with Mr Weinstein’s company last year, said in a statement that he and his wife Michelle were “disgusted by the recent reports” about Mr Weinstein.

“Any man who demeans and degrades women in such fashion needs to be condemned and held accountable, regardless of wealth or status. We should celebrate the courage of women who have come forward to tell these painful stories. And we all need to build a culture – including by empowering our girls and teaching our boys decency and respect – so we can make such behaviour less prevalent in the future.”

But both Mr Obama and Ms Clinton were strongly criticised by many in the Republican establishment and the Trump administration for not condemning his behaviour sooner.

“It took Hillary abt [about] 5 minutes to blame NRA for madman’s rampage, but 5 days to sorta-kinda blame Harvey Weinstein 4 his sexually assaults,” Trump adviser Kellyanne Conway wrote on Twitter.