Will Macron remain Greece’s only friend in the EU? 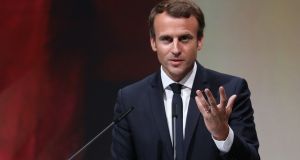 With the changing political landscape in the EU, Greece’s position becomes ever more uncertain. Germany’s post-election attitude to Greece will hardly be any more beneficent than it was under finance minister Wolfgang Schäuble. The only ally Greece seems to have on the world stage is French president Emmanuel Macron who, significantly, made Athens the centre of his first state visit.

As Lara Marlowe reported here last month, Macron’s Athens speech was a demand for “the reformulation of Europe”. His visit here was both symbolic and strategic. Like Barack Obama before him he saluted the Greek heritage, and he went much further. Where Obama’s was an elegant swansong, Macron’s was a wake-up call for both Greece and Europe.

Macron saw Greece’s crisis as symptomatic of a European crisis and laid much of the blame for the Greek situation at Europe’s door. He acknowledged the Greek “sense of injustice” and the resentment at political betrayal, but believes that Greece is weak because, despite the comparative strength of the larger states, the European spirit itself is weak.

In his former job as France’s economics minister, Macron openly backed Greek prime minister Alexis Tsipras and finance minister Yanis Varoufakis in their resistance to EU pressure at the height of the Greek crisis. According to Varoufakis, Macron was the only friend they had – he describes him as a “comrade” actively seeking a “sustainable solution” for Greece. He failed because his own president, François Hollande, at Merkel’s behest, scuppered the deal.

Macron today treads a delicate path between being French and yet conciliating Merkel’s Germany. Merkel’s star may be waning but, as a Greek newspaper observed recently, Germany “exercises complete control over the common currency”.

Macron of necessity supports the idea of a “European Monetary Fund” which would oust the IMF and make Greece’s life that much more difficult. While the IMF has urged debt relief as an essential step in Greek recovery, an EMF, dominated by a hardline Germany, which has consistently rejected any question of such relief, would not. And without debt relief, Greece will remain bankrupt for at least the next 20 years.

The impending departure of Schäuble as German finance minister (and the second-most powerful politician in Europe) has also complicated Greece’s relations with Germany. More of Schäuble would have been uncomfortable, but now, with Germany moving decisively towards the right, the discomfort could increase significantly.

As Greece heads into a review of its performance, with the aim of exiting the third bailout next August, many promised reforms are still on hold. Without those essential reforms, the issue of debt relief will never get to the table. And even if Greece exits the bailout, its economy will be monitored by the bigger states for many years to come.

As French president Macron has renewed his support for Greece. You might think that this country has no need of olive branches, but in reality any gesture is welcome. Macron brought with him a team of entrepreneurs to discuss investment in Greek industry. Investment requires confidence and trust, which Macron explicitly offered to Greece. But can Greece justify that trust by removing the obstacles to reform which the EU has identified?

The Syriza government is committed to doing so, but its political will encounters intransigent bureaucracy. Greece remains a difficult place to do business. It consistently scores below most developing countries in competitiveness and ease of business start-up.

Macron sees a larger picture with Greek problems, especially youth unemployment and inadequate training programmes, as part of Europe’s own problems. He sees a need for “a transformative economic and social project” and an openness lacking at present. But reforming the spirit of Europe and the humanity of the EU comes at the price of a common budget and a common fiscal policy, including equalisation of EU tax laws, a policy likely to meet widespread resistance.

Greek voters are overwhelmingly disenchanted with all aspects of the EU, yet it is only within the EU that economic survival can be envisaged. However, desirable a Grexit may have been, the time for that kind of resistance has passed. Greece has been treated harshly – sometimes with just cause – but at this stage its health and, if the Germans are to be believed, the health of the euro zone, depends on sustainable debt and sustainable growth in Greece, both of which, at present, are remote possibilities.

Whether Macron, hailed as Europe’s rising star, will remain as friendly towards Greece as he has been up to now, depends on how that star fares in the light of post-election Germany and his own domestic situation. And it is certain that, however friendly and supportive Macron may be, Germany will dictate the future of European economic affairs as a whole and in that scenario, Greece remains a small potato.