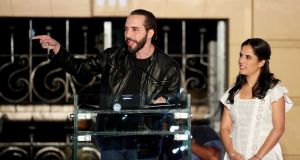 A former mayor campaigning on an anti-corruption ticket swept to victory in El Salvador’s presidential election on Sunday, bringing an end to a two-party system that has held sway over the violence-plagued Central American country for three decades.

Nayib Bukele, the 37-year-old former mayor of the capital, San Salvador, had won 54 per cent of votes with returns counted from 88 per cent of polling stations, said Julio Olivo, the head of the electoral tribunal.

Mr Bukele won more votes than all other candidates combined in his first-round sweep, highlighting deep voter frustration over the failure of the two main parties to tackle violence and corruption.

“This day is historic for our country. This day El Salvador destroyed the two-party system,” Mr Bukele told hundreds of Salvadorans who danced, waved flags and blew whistles in a San Salvador plaza that Mr Bukele revitalised when he was mayor from 2015 to 2018.

His two rivals from the mainstream political parties conceded defeat.

Mr Bukele must now contend with US president Donald Trump’s frequent threats to cut aid to El Salvador – as well as neighboring Guatemala and Honduras – if they do not do more to curb migration to the United States.

At home, supporters hope that a third-party politician will usher in changes to improve a sluggish economy and widespread poverty.

“Let’s see if he can do what he’s promised for us,” said a supporter, Baltazar Sanchez (30), at Mr Bukele’s victory speech. “After 30 years of two parties, we’ve been dealt the best hand.”

Gang violence has made tiny El Salvador one of the world’s most murderous countries in the past few years, driving Salvadorans to flee to the north.

Among his campaign promises, Mr Bukele, an avid social media user who snapped a selfie with supporters before declaring his win, said he would push infrastructure projects to limit such migration.

Since the end of its civil war in 1992, El Salvador has been governed by the ruling leftist Farabundo Marti National Liberation Front (FMLN) and its rival, conservative Nationalist Republican Alliance (Arena).

Though he describes himself as from the left and was expelled from the FMLN, Mr Bukele has formed a coalition including a right-wing party that together has just 11 seats in the legislature, which consists of 84 people.

Outside the hotel in San Salvador where Mr Bukele waited for the results, a group of supporters set off fireworks, beat drums and danced as early figures came in. “Yes, we did it! Yes, we did it!” they chanted.

Along with the goal of modernising government, Mr Bukele, who is set to take office in June, has proposed creating an international anti-corruption commission with the support of the United Nations, following similar committees in Guatemala and Honduras.

“We’ll create a [commission] ... so that the corrupt can’t hide where they always hide, instead they’ll have to give back what they stole,” Mr Bukele said in January.

Growing up, Mr Bukele’s relatively wealthy family was sympathetic to the FMLN, the former leftist guerrilla army that became a political party at the end of the civil war.

“A dictator is a dictator, on the ‘right’ or the ‘left’,” Mr Bukele wrote last week on Twitter. – Reuters

1 Nine tenants evicted from north Dublin property by men in masks and dark clothing
2 92 new cases of Covid-19 confirmed in Ireland with no new deaths
3 Young women found clinging to lobster pot after spending night missing in Galway bay
4 Aaron Brady, the man who said with pride he was a cop killer
5 Rescued women ‘weak and tired’ but ‘thankful’, says fisherman who found them
Real news has value SUBSCRIBE