Trump appoints his former doctor as his chief medical adviser 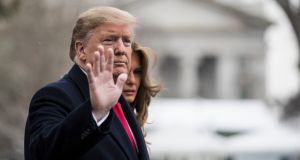 US president Donald Trump has appointed his former doctor as his assistant and chief medical adviser.

The announcement by the White House on Saturday follows Mr Trump’s decision to re-nominate Rear Admiral Ronny Jackson for a second star due to inaction by the previous Congress.

The navy doctor withdrew following allegations of professional misconduct, which the Pentagon continues to investigate.

Mr Jackson has denied any wrongdoing.

He led the medical team for Mr Trump’s physical examination last year and said the president was in excellent health and has “incredibly good genes”.